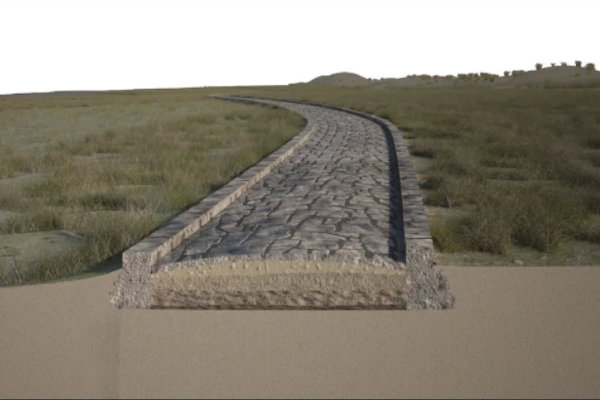 in The future of yesterday
⚪ Reads in 3 minutes

In the ancient Roman Empire, stone-paved streets were crucial for trade and government, transporting goods and people to and from their destinations.

Many of these Roman-era routes have long since disappeared without a trace. The recent discovery in Italy of a Roman road reveals something more about one of the most precious and fascinating cities in the world: Venice.

A research team led by Fantina Madricardo at the Institute of Marine Sciences of Venice (ISMAR) unearthed a stretch of Roman road during the investigation of the rise in the sea level of Venice. (Here the research, published in Nature).

How did the research go?

In the first phase, the team used sonar to create a 3D map of the bottom of the Venice Lagoon without the need to dive into the water.

From this screening, structures (12 in all) came to light that are believed to be the remains of an ancient pier from the Roman era.

The Roman road returned to light

After this first discovery, the police divers decided to explore directly on the spot, with cameras and filming tools. Footage captured on this expedition showed a winding section made of smooth paving stones, which has been identified as the surface of a classic Roman road.

Venice was probably connected to the Roman city of Altinum by this road. It's a bit of a bewildering finding, when you consider the fact that it has always been believed that Venice was founded in the XNUMXth century AD, following the fall of the Western Roman Empire.

A change of perspective

This discovery indicates that a settlement already existed in the Treporti Canal, where Venice is now located, in Roman times. Migration to Venice is now described as a "more gradual process" by Madricardo in the published research, instead of the sudden transition that was previously hypothesized.

This path and its surrounding structures were usable on the surface about 2000 years ago. In addition to the historical issue, the circumstance also confirms the effects of sea level rise aggravated by global warming.

There may be other wonders hidden beneath the surface. The Roman road to Venice is just one of them.