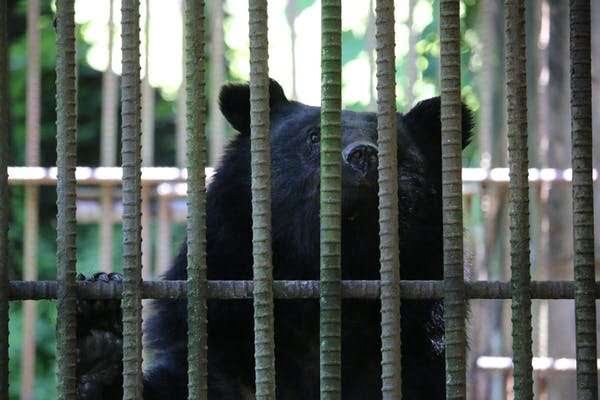 Il rewilding, which I have been talking about in various sauces for a while, popularized the idea of ​​reintroducing lost species into modern habitats. The reintroduction of the wolf in different habitats, for example, has probably benefited other species as well, demonstrating how these activities can not only slow down the loss of biodiversity, but also reverse it.

It is one thing to repopulate woods, or large parks, and another is to attempt the operation in places much closer to people, whether it is lynxes in Great Britain or cheetahs in India. Putting large wild animals close to humans is not easy, with all the potential problems it could bring in terms of human-wildlife conflict. In South Korea, a country in population density not too different from Italy, environmentalists aim to restore the native population of bears. Asiatic black bears or "moon bears", to be precise. Although slightly smaller than their North American cousins, these bears are nonetheless large wild animals, capable of causing fear and alarm and posing a risk to human life and property.

How will they do it?

In the 90s, the Jirisan area had become the last foothold of the Asian black bear in South Korea. Japanese colonial rule first, and then excess hunting had done enormous damage. At the end of the century, they had remained "officially" five wild bears across the country: the species it was on the verge of extinction.

Why do I say "officially"?

On balance, those 5 weren't the only bears in the country anyway. A large population of bears was found on farms that extracted bear bile and other substances for traditional medicine, as well as meat for food. Since the 90s, South Korea has cracked down on the trade in bear parts, but even today the remaining population of about 380 captive bears still far exceeds that in nature (only 70 specimens in 2021).

A small platoon of bears to leave

These farm bears could be the ideal animals to rebuild a wild population. But they belonged to a number of different subspecies, and were potentially at risk for the disease. For this, the bears were imported from China, Russia and North Korea: the first six in 2004, right in the Jirisan area. It was the beginning of an incredible triumph.

The secret? Low expectations. No big claims have been made about reshaping the relationship between man and the natural world, and no changes have been promised to age-old methods of landscape management, things that often appear in rewilding debates. Environmentalists in South Korea have limited themselves to setting a modest initial goal: bring back a population of 50 specimens to a single protected area.

Success is in the details

Some details are the basis of what I can easily define as a perfectly successful great undertaking. First of all "soft" releases, where bears are kept in enclosures to acclimate to their surroundings before being released. Then the broad monitoring, which greatly increases the probability of survival. Finally, the tracking: specimens that stray too far are returned to the national park.

Also breeding in captivity, backed by impressive veterinary experience, has helped the population grow. A milestone involved the first successful use in the world ofartificial insemination for this bear species, an advantage for maintaining genetic diversity in a small population. Bears injured by traps or traffic accidents have also been successfully reported back to the wild.

Result? The initial target of 50 bears has been surpassed and the population now exceeds 70.

New challenges for the bears

A recent study suggests that Jirisan National Park may be close to reaching its bear limit.

Conservationists have so far been remarkably successful in creating support to restore bears in Jirisan National Park with educational programs, presentations for residents and hikers, a center where visitors can learn about the reintroduction program and even the use of the bear's mascots. moon bear for the 2018 Pyeongchang Winter Paralympics.

Now, though, the (for now) sporadic appearance of bears outside the national park still attracts prime-time media coverage. This can hinder efforts to cultivate tolerance and maintain a reasonable dialogue with the public about the realities of living with bears. People who feed bears remain a problem, as does the illegal snare for game species, which can seriously injure them. As South Korea reaches the next stage of its reintroduction program, Is the country ready to accept bears outside a protected area? Because this is what it is. Domestic partnership.

It will be fascinating to follow these bears over the next few years as conservationists address these questions. And Asian black bears are just the beginning. South Korea has instituted programs to restore the surprisingly rare red fox in the country and the long-tailed goral, a goat-like mammal whose populations have been impoverished by poaching and habitat loss.

What do you think? Can it work elsewhere?

If we really want to start establishing a permanent presence on other celestial bodies, the old options are not ...