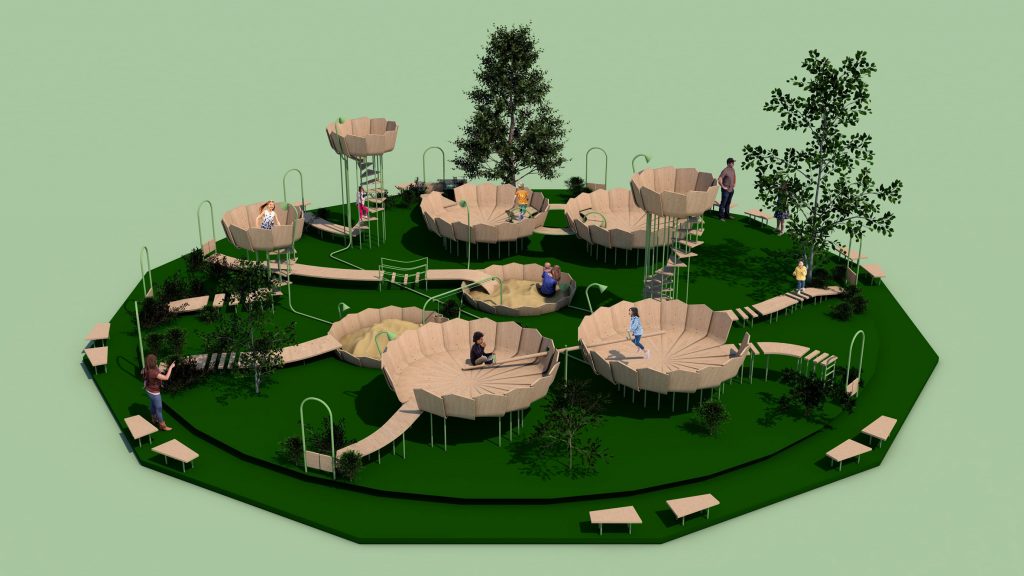 A playground that allows interaction and respects health rules. A difficult challenge, to which two German designers responded with a concept.

German designers Martin Binder and Claudio Rimmele have designed the concept of a “contagion-proof” playground where children can play together safely during (or after) the coronavirus pandemic.

In the wake of the "creative challenge" that the pandemic is posing to everyone, the designer Binder and the psychologist Rimmele have decided to solve the problem of creating a space that protects its users. A playground that respects the rules of spacing while at the same time allowing fun interactions.

Rimbin, the resulting concept, is a playground made up of a group of individual play areas arranged like water lilies on a pond.

Each child can have his own play platform, with individual paths leading to separate entrances, from which they can see and communicate with each other at a safe distance.

Users will be able to see from the entrance gate when an area is occupied. Once inside, the children will be able to communicate with each other through the areas by talking in hollow tubes, as in the "telephone game" that years ago was played with a glass and a rope.

The platforms can host different types of activities and games. Some contain sand, while others have swings, ladders or circular rides.

The elements exposed to direct contact with children, such as handles and pipes, are made of metal to be easily sanitized.

"Children need interactive outdoor games," say the two. "For them, social and physical stimuli are necessary for physical and mental development and for learning important social skills."

In an attempt to better understand the needs of both parents and their children, Binder and Rimmele conducted telephone interviews with adults and children who described their daily lives during the blockade.

“For most parents it was clear that a solution had to be found to offer their children more physical activity with friends in nature,” they said.

An important part of the research and development has been the examination of biological forms and natural materials.

The strength of the water lily

Rimbin's design is inspired by the leaf shape of an Amazonian water lily, known for being able to withstand heavy weight. “To demonstrate the natural bearing strength of the water lily, botanist Joseph Paxton placed his daughter on the leaf of a giant water lily around 1849,” explain the creators of Rimbin.

Binder and Rimmele imagine that the playground is used both during and after the pandemic.

The duo's attempt is another way to rethink the long term design of solutions long-lasting, good for emergencies and beyond.

How public transport needs to adapt to the "new normal"