Al #CES 2017 in Las Vegas, the main event for tech enthusiasts, the #virtual reality will be very present. Among accessories and visors, there are many possibilities for those who want to immerse themselves in a virtual world.

The Japanese company Cerevo, for example, presented Taclim, a sort of virtual reality controller that should be worn on the feet. They are like #shoes that allow the extremities of the body to interact in virtual environments.

They would be very useful, for example, during action games where it may be necessary to run or kick an enemy. Until now, in fact, there were only controllers dedicated to the hands. It is still a prototype, but the Japanese company has decided to take it to CES to gather feedback from users to improve it quickly.

At the moment, in fact, Taclim shoes are not particularly beautiful nor comfortable to wear, but as mentioned it is a prototype in development. It seems that Cerevo, however, does not want to market shoes for consumer users but only for the business world, or for entrepreneurs who want to advertise their games or their services. 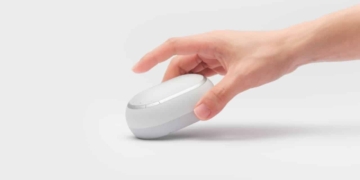 A super alternative to wearable devices, it simultaneously measures electrocardiogram and heart rate. A super stethoscope.