For years, panoramic photos have been the prerogative of Reflex cameras and a good amount of work to connect different points of view in a coherent image: with Panono things change.

This project is developed according to totally different criteria: it is a sphere equipped with 36 micro cameras capable of instantly photographing the entire field of view, creating real “spherical” compositions with an enormous resolution of 72 megapixels. You can throw it just like you would a ball, and trigger it seconds later. Initially developed as a prototype two years ago, Panono has been progressively miniaturized in subsequent versions.

His development team led by Jonas Pfeil, student and researcher, he is now looking to derive a release that favors mass production, raising funds through a crowdsourcing platform.

The fundraising campaign aims to market a model costing around € 500 and will end in January 2014. Here is the link for more info: and the inevitable video :)

Graphene prodigies: charged electric cars in 16 seconds, now you can 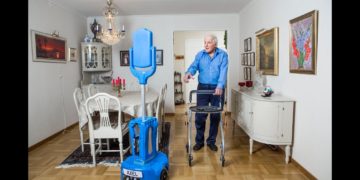 Internet of Things and AI work in synergy in the project that will involve 30 elderly people in Italy (in Milan) and Spain ...