Zac Vawter lost his leg in an accident 3 years ago and has since gone through an ordeal in search of a prosthesis (he calls it a 'fake leg') that would have satisfying answers for him that are close to those of a real leg. So the thirty one year old computer engineer from Washington joined in 2010 as a voluntary tester in a research program with the aim of creating a thought-guided bionic leg.

The Rehabilitation Institute of the Center for Bionic Medicine in Chicago led a trial that today yielded fabulous results: Vawter is about to 'debut' driving a whole new bionic leg, in a sometimes arduous task even for real legs: climbing the 103 floors of the Willis Tower in Chicago.

The event, called 'Skyrise Chicago' it will see the participation of about 3000 people: it will serve to raise funds for the Institute, intended for experimentation and creation of other bionic supports. Zac has been training for days to hours: the research team has placed 11 electrodes on his leg, capable of transmitting the 'orders' to the microcomputer that controls the bionic limb. He thinks "do these stairs" and incredibly his body works harmoniously with a robotic leg.

The project, founded by the US Department of Defense in collaboration with Vanderbilt University, MIT and other American institutes, has so far cost around € 7 million, and could give us a future in which bionic arts connected to our nervous system do their job very well. .

The day after tomorrow, November 4th, Zac will attempt the climb. And we will tell you about it. 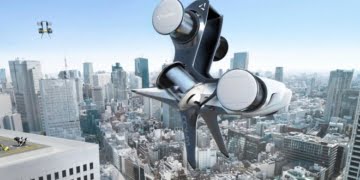 The company known for its vertical thrust engines collaborates with the Japanese delivery giant for a cargo drone from ...