Is not the first and it won't be the last. Scientists from the University of Groningen (Holland) and the Empa Research Center (Switzerland) have created a nanometric transport system equipped with four motor units (translation: a “namomachine”). It is electric, four nanometers long and every half turn of the wheels has to fill up ... It works thanks to a scanning tunnel effect microscope positioned above it, which transmits a tiny electric charge that causes reversible structural changes in the wheels (translation: makes them spin).

For those wishing to learn more, here is the paper, on Nature, it's a summary on the excellent KurzweilAI .

What exactly is such a car good for? Absolutely nothing. What are such experiments for? Absolutely everything ... Molecular nanotechnology is the construction of devices atom by atom, molecule by molecule. Today it is a sector still incubating in international research laboratories, but in the near future it could turn out to be an authentic transformative technology with an impact on our lives that would make computers, internet and mobile phones to pale ...

For me it all started (with regards to nanotechnology) with Engines of Creation, of Eric Drexler (which I later published, in the Italian version, on Estropico: Creation engines). Released way back in 1986, I found it in my hands in the early 90s and it caused a genuine Copernican change in my way of seeing the world. The fragments of the future presented by Drexler point to an unprecedented level of control over the matter. Here is how the author opens the work: "Coal and diamonds, sand and integrated circuits, healthy and cancerous tissues: throughout history, variations in the arrangements of atoms have made the difference between poor and valuable, between sick and healthy. Arranged in a certain way, the atoms form soil, air, water; arranged in another way they become ripe strawberries. Arranged one way are houses and fresh air; in another, they become ashes and smoke. "

Which gives molecular nanotechnology a number of potential consequences from dizziness: from unprecedented levels of wealth (see chapter Plenty engines), to the cura aging (Healing engines e ), until the holy grail of transhumanist thought, none other than the defeat of death (A door to the future). But as that profound philosopher who is Spider-Man says, "With great power comes great responsibility," which brings us to the chapters Destruction engines e Strategies and survival, in which Drexler takes into consideration the most pessimistic scenarios and how to avoid them.

A quarter of a century ago, when Engines of Creation was published, nanotechnology was little more than a theme for futurologists. Today the sector of nanomaterials is estimated at more than $ XNUMX billion a year, but Drexler's predicted molecular robotics is still in its infancy, as demonstrated by the 'nanomachine'. Drexler has since published nanosystems, a technical text, e Engines of Creation 2.0, an update on the occasion of the twentieth anniversary of the publication. And it is encouraging to note that the most spectacular nanotechnology risk described in Engines of Creation, that of the so-called "gray goo" (literally: gray goo), is been downgraded by Drexler and others: it is now seen as extremely unlikely that a horde of crazed nanorobots will devour everything they encounter, replicating themselves until the biosphere is transformed into an oceanic gray goo made up of other nanorobots. The fact is, a self-replicating nanorobot is not indispensable to deliver on the extraordinary promises of molecular nanotechnology.

A very approach more simple (relatively speaking!) and infinitely more sure is that of the "nanofactory" and since a picture is worth a thousand words, I leave the explanation of this concept to the video below, entitled 'Productive Nanosystems: From molecules to superproducts'. And if I've managed to arouse your interest in the perspectives opened up by this emerging technology, you'll be pleased to know that Drexler recently announced the arrival of a new book on these topics in 2012: Radical Abundance.

Image: the molecular nanomachine on a surface of copper atoms (credit: Empa). 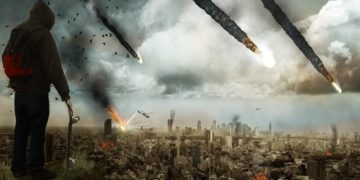 There are some events that could change the face of the planet: here are some doomsday scenarios for which governments prepare ...