A bridge that develops like a forest joining two banks separated by a highway: Atrium shows us the fantastic synergy possible between man and nature. 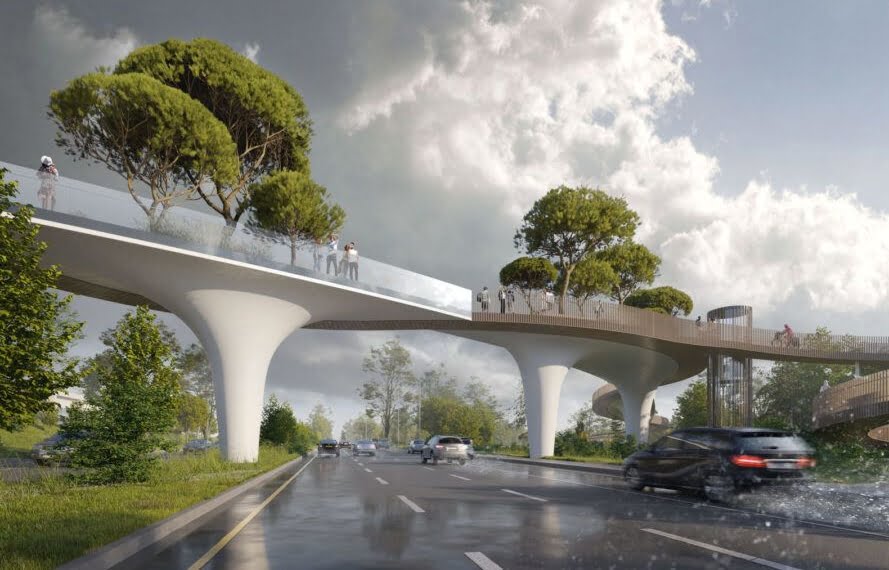 in Architecture
⚪ Reads in 3 minutes

If you think about it, bridges are one of humanity's most ambitious achievements. It takes a lot of confidence to look into an abyss or a body of water and have the determination to build something that crosses it safely. A bridge is an extraordinary tool, which fills the gaps and connects places and people together: what I am talking about today does not seem a simple, future evolution of the concept, but also a fascinating marvel of engineering.

Nothing resembles him: we have seen many wonders (from those of Leonardo at the Golden Gate in San Francisco), but this one has a different spirit. The function is similar, however: to join two banks, in this case it is two green areas in the city of Almaty, Kazakhstan.

Two areas separated by a highway: what could be better than a pedestrian bridge to join them? Especially this bridge, which has an extraordinary design made of swirls, ramps and swirls. And an all green heart.

Serpentin, prodigy bench made with a single plywood spiral

A pedestrian bridge that becomes a suspended park

The starting idea of ​​the architecture studio Atrium was to interfere as little as possible with the natural landscape. The goal has been fully achieved: this structure does not cover the context, but completes it, integrates perfectly.

On one of the two ends, the bridge leads into a botanical garden: going up, pedestrians find themselves in a sort of hill with an observation platform and green spaces. Nature is not just around the bridge, it is a large part of the project: the trees grow high above it for its entire length.

And at the same time it has something futuristic, it looks like a science fiction structure. The flared poles in the upper part taper downwards, recalling in a stylized way the crowns of the trees: a garden of Babylon of the third millennium.

Combining nature and architecture is not a new concept: but it does so in a particularly effective way. I would love to go on the highway and cross gardens like this along the way.