Now cleared of customs, 'chemtrails' are advanced geoengineering plans to spray the skies with aerosols and refreeze the poles. Fears remain, however. 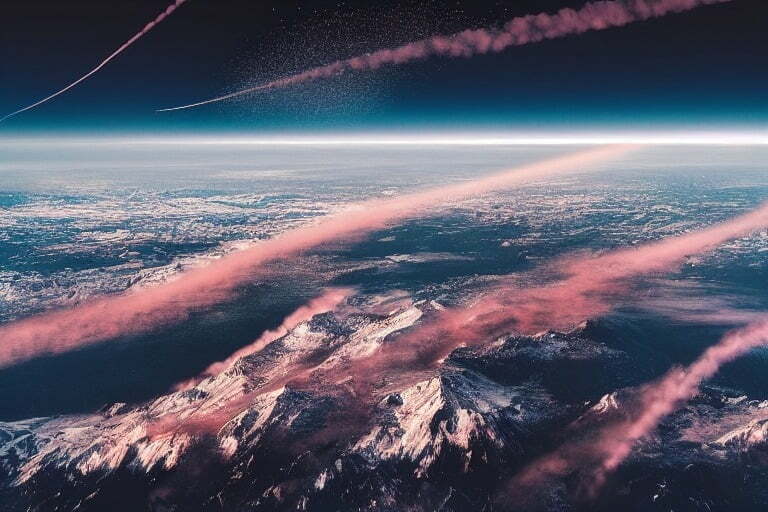 A new study suggests we may be able to cool the poles by 2 ° C (3,6 ° F) and refreeze the Arctic and Antarctic with a project to spray stratospheric aerosol (SAI) particles that reflect heat. , focus on the poles. The side effects could be unpleasant, but the plan offers a way to slow or reverse the catastrophic sea level rise predicted as the polar ice collapses. Is it our only hope of saving the planet?

The study, with free access to the journal Environmental Research Communications (I link it here), says SAI could be used to "directly cool" the Earth by spraying sulfate particles into the stratosphere, which would then reflect some of the solar heat back into space. According to the authors of the study, this could be done with airplanes or balloons and could be implemented within a few years.

Don't call them chemtrails (though, though)

That of the geoengineering through aerosols in the skies is a much discussed concept that is inspired by the cooling effects that usually follow large volcanic eruptions. These natural events expel large quantities of dust, ash and often sulfur dioxide into the air. The first two are responsible for a brief cooling effect of about two hours, but sulfur dioxide tends to rise high into the stratosphere, where it combines with water molecules to form sulfuric acid droplets and remains for up to three years. , reflecting solar radiation and producing a long-lasting surface cooling effect.

In summary, the idea behind SAI is to load high-altitude aircraft with sulfur dioxide and fly around to spray this substance into the high-altitude atmosphere, mimicking the cooling effect of a volcano. Remind you of something? Mind you, the way sulfur dioxide eventually leaves the atmosphere again is by combining into larger and larger droplets that eventually become heavy enough to fall to earth in the form of acid rain. As you can imagine it is not the best for the life of plants, fish, animals. People.

And all sulfur oxides are a disaster for our breathing: they damage the lungs and cause asthma and bronchitis if inhaled regularly.

What if we just sprayed the poles?

Until now, most of the research and modeling SAI has focused on spraying these aerosol emissions across the planet. However, many scientists are considering doing this only at the North and South Poles. Climate change is affecting the Arctic and Antarctic regions to a much greater extent than the rest of the world; their warming is much faster than the global average. The melting of colossal ice structures will cause sea levels to rise, with devastating effects around the world.

To reiterate the obvious: no one in the scientific community wants to create skies clouded by emissions, spray polar bears and penguins with poisonous rain, or find alibis for those who cause large carbon emissions. However, we are on a troubling path, where Arctic summer ice will likely be completely melted by 2050, at best. To avoid an unimaginable disaster you need to quickly explore every possible solution, to implement it or learn along the way.

Spray the skies to refreeze the Arctic and Antarctic, all the details

Aerosol research for geoengineering purposes is progressing rapidly and pole-restricted use could provide higher yields at significantly lower costs. According to previous results, spring and early summer are most likely the best seasons to carry out this project. We could focus on both poles with a fleet of planes that changes position according to the season.

The study's suggested cooling target for the north and south poles is 2 ° C (3,6 ° F), whereas Arctic temperatures have risen by more than 3 ° C (5,4 ° F) over the past half-century. Aerosol spraying would be made at the 60th parallel, roughly at the latitudes of Oslo, Helsinki, Alaska and Magadan, in Siberia in the northern hemisphere, and at the height of the southern tip of Patagonia in the southern hemisphere. At these latitudes, it is possible to do the job more economically, since the troposphere is at a lower altitude and the plane does not have to fly that high. The suggested altitude is 13 km (42.600 ft).

To get a result of 2 ° C, the plan is to spray 6,7 teragrams (6,7 billion kg / 14,8 billion lbs) of sulfur dioxide per year in each pole, requiring a (whopping) total of 13,4 teragrams (29,5 billion pounds) of material per year. The "relatively low" cost would be 11 billion euros a year. That there are not many to save a planet, but are we sure to save it in this way?

What can go wrong?

There are many concerns regarding the use of SAI as a method to combat climate change. First, it would not address the root cause of climate change - emissions from human activity. Furthermore, there is a risk that spraying the skies and cooling one part of the planet could have unforeseen consequences elsewhere. For example, if we were to artificially cool the Arctic, we could alter global ocean circulation patterns and potentially cause droughts in other parts of the world.

Although calibrated to lower polar temperatures by 2 ° C and to begin refreezing sea ice at the poles, this project would have a number of unwanted side effects. Researchers note that sulfur compounds added to the stratosphere can impact ozone concentrations. Put simply: they could slow or reverse the recovery of the Antarctic ozone hole. The effects of all these sulfur dioxide teragrams and associated acid rain deposits are risky for both humans and the ecosystem in general, and require much more research. Last but not least, spraying the skies in this way could also cause stratospheric warming.

If you wanted an answer, and you asked yourself the question: yes, we can technically spray the skies and be able to refreeze the poles. It is feasible, and relatively inexpensive too. In the study that I linked to you there is every kind of detail, read it. Even the number and type of aircraft needed for this operation, even the time needed to implement it, everything.

But the whole world needs to agree that thesea ​​level rise it is a worse result than the effects of a massive geoengineering program, especially (but not limited to) for the estimated 1% of the population living in the areas where the effects will be concentrated.

There is no easy answer when it comes to tackling climate change. This is a complex problem that requires a multifaceted approach. Geoengineering should not be seen as a "silver bullet", but as a tool in our arsenal against climate change to be used with great caution. If they worked, they would only cure the symptom of overheating, not the root causes.

Spray the skies with aerosols could be our only hope of saving the planet from a catastrophic sea level rise, and I understand the need for action. However, I now see too many references to this technology around, and I perceive too much "haste" not to think that someone wants to take this step as soon as possible.

I just wonder if it's not longer, much longer than our legs.