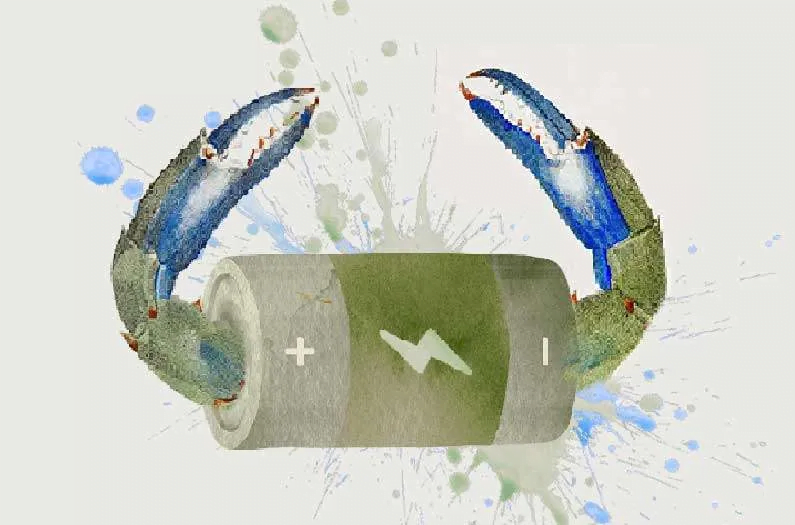 Crab shells and zinc were used to create a new 100% biodegradable and recyclable battery. The safe, durable and environmentally friendly battery can be recharged at least 1.000 times and is ideal for storing wind and solar energy for the power grid.

Today, you know, the most used technology to accumulate energy from renewable sources is that based on lithium ions. I have already spoken to you how complex this supply chain is becoming: today, the boom in electric vehicles has put it to the test even more.

Not to mention those already produced and marketed: it is not easy to recycle them at the end of their life, so most of those produced by 2030 (we are talking about 15 million tons) will end up in landfills.

Researchers from the University of Maryland and the University of Houston set the goal of creating a more sustainable battery and chose the chemistry of battery zinc-metal, already in the works for years by their team.

Zinc is much more abundant than lithium in the earth's crust, which is why zinc-ion batteries are cheaper. But traditional batteries, made up of zinc anodes, metal oxide cathodes and water-based electrolytes, suffer from an uneven distribution of zinc on the electrode surface, which makes them dangerous and short-lived.

Researchers have developed a biodegradable electrolyte gel from chitin, a protein that makes up the hard shell of crustaceans: crab, lobster, shrimp, there's plenty of it. Typically, chitin is thrown away as a by-product of the food industry.

Combining it with zinc, the researchers created an excellent electrolyte. The battery, reported in the magazine Matter , he kept an efficiency of 99,7% over 1.000 cycles during high-current operation.

Can be recycled (almost all)

Two thirds of the battery is biodegradable, which makes it very environmentally friendly. Both the chitosan electrolyte and the cathode material biodegrade in the soil within a few months, and the remaining zinc can be recycled.

"In the future, I hope that all battery components are biodegradable," says Liangbing Hu, materials scientist and one of the authors of the study. that I link to you here.

For once, saying "we caught a crab" is good news.