Orbit is a plan to transform rural suburbs into ideal commuter towns. Will it work? 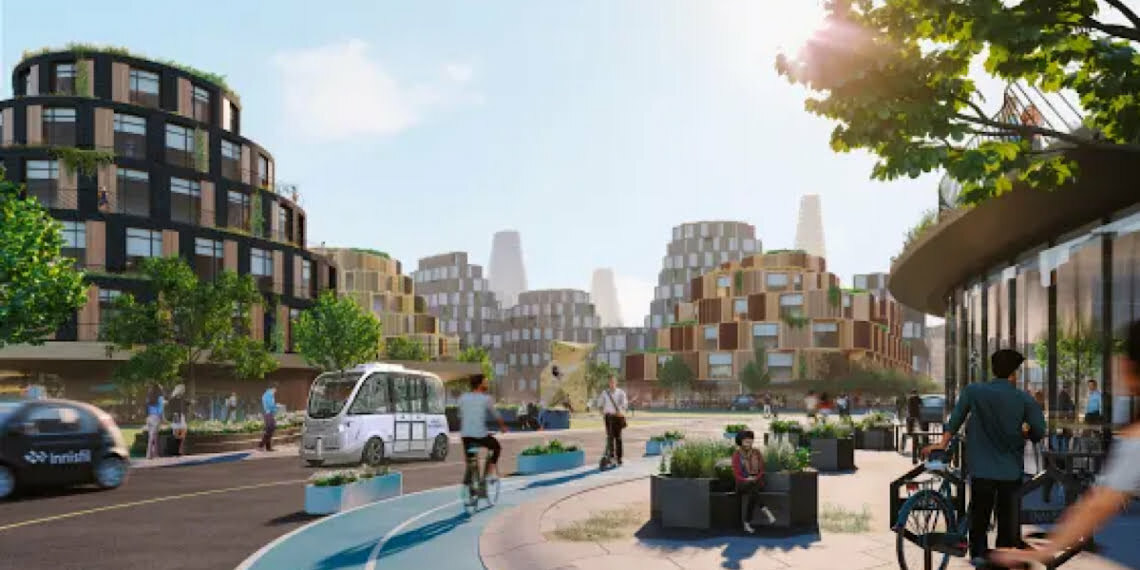 in Architecture, Transportation
⚪ Reads in 4 minutes

Just outside Toronto, in an agriculturally dominated area, an "impossible" community is being built which could change the conception of what we now call "urban suburbs".

It is The Orbit, a futuristic-sounding district that will rise on the edge of Innisfil, a commuter city about half an hour's drive from Toronto. The Orbit will consist of a grid of streets radiating around a dense central neighborhood, with mid-rise skyscrapers, wide open spaces and a mix of residential, commercial and civil buildings. The core of the plan is a commuter train station that acts as a central link.

Innisfil it is one of the classic suburbs of large cities. A population of about 40.000 inhabitants (practically the hinterland of cities like my Naples), which should however double within the next 30 years.

You know well that the outcome of many urban and environmental challenges in the near future depends on the management of this growth. Electric vehicles will not be enough: city services, public safety, parks, infrastructures they must be designed with criteria in anticipation of all future scenarios. The Orbit tries to understand how suburbs can be "designed" for future changes, possibly avoiding the degrading "neighborhood, mall, neighborhood, mall" approach we see today.

How did the idea for The Orbit come about?

The process began in 2017 when the municipality submitted a request for proposals for a new neighborhood around a new, planned rail transit station. In 2019 the city authorities and the regional transit authority, Metrolinx, entrusted the architectural firm Supporters the development of The Orbit.

This "futuristic" plan for the suburbs of tomorrow is actually inspired, my architect friends teach me, by the concept of urban planning of the early twentieth century, the "Garden City"By distributing residents, businesses, and farmland in a radiant form of hubs and rays, the garden city envisioned a very different kind of suburban development from the bad one we've seen since World War II. The Orbit is meant to house about 100.000 people, all within a 1 mile (1,6 km) radius of the train station. In summary: 15 minutes on foot, and I'm not telling you with a bike.

It could be a way to make a clean sweep of how the smart suburbs of the future could grow around transit nodes. An evolution of the concept of the "city of 15 minutes" on which several metropolises are working, to place most of the things a person needs (from services to entertainment) at reasonable distances to travel on foot or by bicycle. And in low-emission areas.

It's not easy, and it doesn't even seem that easy

Of course, creating a new neighborhood from scratch is no easy feat. The Orbit's first "operational" plans could be finalized by next spring and the City of Innisfil is currently working to raise community awareness to ensure the plan is in line with residents' expectations.

As mentioned, the transit station is the heart of the project, both from a design and feasibility point of view. The start of the works, initially expected by the end of 2022, has been postponed due to the pandemic. It should begin in 2023, and with it make the whole project flourish: it will take time, but everyone is confident that in the end this "prototype for the suburbs of tomorrow" will see the light.

"We built a great prototype," they almost say in chorus Alex Josephson e Oliver Jerschow, respectively CEO of Partisans, the studio that designed the project, and the administrative director of the city of Innisfil. "It can be applied to any rural environment to make a community grow in a more just, organized, ecological way".

Who knows if and when we will see such suburbs even in the old continent.