Discovery of a never-before-seen connection between the olfactory bulb and the brain of dogs: the relationship between our four-legged friends and smells is much, much more extensive than expected

They smell diabetes, cancer and Covid-19. And they seem quite intrigued by the smells of poop (theirs and others). It's the dogs! You know them, with that big nose always stuck everywhere, we are well aware of their powerful sense of smell, but a recent study still amazes us.

The researcher Erica Andrews Cornell University and colleagues have just mapped the olfactory pathways in the brains of domestic dogs (canis familiaris ) using diffusion MRI scans. This technique uses differences in the flow of molecules, such as water, to create a complex map of tissue structures.

A map to understand what smells become in a dog's brain

"We have never seen in any other species this connection between the nose and the occipital lobe", explains researcher Pip Johnson. "It is something similar to what is found in the human visual system."

In short, do dogs "see" smells? It is very likely that this is what allows our intelligent companions to operate so effectively even without sight. In the past, several people have empirically theorized this connection, but no one had proven it.

A dog's nose by itself is extraordinarily gifted, with beyond  220 million cells that detect odors (we have less than a quarter of them). With just their nose, dogs can form a spatial awareness, read chemical "messages", perceive our mood, even trace sources of heat.

When we enter a room we use the view to get an idea of ​​the space we are about to cross, of the obstacles, of the presences. In dogs, sense of smell and sight are intertwined: and that's not all. The study also found links to four other brain regions.

A map of the nerve tracts in the dog's brain. Just like in humans, the olfactory pathways to the piriform cortex (green) and the limbic system (blue) are likely to link the sense of smell to memory and emotions. It is thought that the entorhinal cortex (pink path) elaborate smells and also relates to memory. Another unexpected discovery, also the connections between the olfactory bulb and the brain stem through the corticospinal tract (turquoise). They can trigger "instinctive" and "automatic" responses to odors that do not involve other areas of the brain.

The researchers obviously caution that more research is needed before the exact function of all these connections can be established. There is no certainty that dogs can physically "see" smells, but these findings suggest that the olfactory system plays a leading, if not dominant, role in canine cognition. "

The conclusions of this study, that I link to you here, are the extraordinary starting point for a new journey to discover the animals that are closest to us ever. 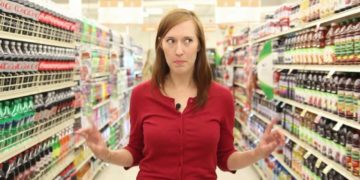 We throw away healthy food, or eat bad food thinking it's good: legacies that will end within the next 3 years