A new study allows us to closely observe the mechanisms underlying latent learning, as we learn through observation

Latent learning, also known as "subconscious learning", describes the human ability to add knowledge to one's baggage through observation. We are so used to learning through external teachings that we don't notice how the brain actually works.

Every time our eyes rest on something, every time we observe and experience something, the information is assimilated by the brain. Our mind tends to categorize, to divide into similar categories groups of elements that are similar, or that have similar behavioral characteristics.

That's exactly what he's talking about the new studio di Vladimir Sloutsky, a sociologist at Ohio State University. He speaks of latent learning and man's ability to learn without teaching, only through observation.

We often observe new things in the real world without the goal of learning them, but we have found that simply being exposed to them generates a state of curiosity in the mind that leads us to be ready to know them later.

The experiment on latent learning

The team of researchers conducted five different experiments, getting to involve 438 volunteers. All using a custom game, which shows participants unknown fantastic creatures, divided into categories.

In the initial stage, the participants were asked to click as fast as possible on the creature that appeared on the screen. The figures alternated on the right and left side, reflecting the reference categories. These same categories remained "secret" in the eyes of the participants, so as not to influence the results.

In subsequent experiments, researchers have switched to so-called 'explicit learning'. They showed participants the invented categories - 'flurps' and 'jalets' - and their differences.

Below is a small example of the figures, where A and C differ in some small elements.

Volunteers exposed in advance to the images of “flurps” and “jalets” were much quicker to grasp the differences between the categories of creatures, even without having received initial learning instructions.

"Then, when explicit learning came along, it was easier to label those distributions and form the categories."

In the last experiment, the participants did not have to pay attention to the creature. The researchers accompanied the images of the initial phase with sounds, and asked the participants to focus only on the sound.

Also this time, the volunteers who saw “flurps” and “jalets” in the initial phase were able to obtain better results in the learning phase.

As the experiment aimed to demonstrate, mere exposure was enough to start learning.

However, as the psychologist reminds us Layla Unger, the participants only started learning: “Exposure to creatures left the participants with some latent knowledge, but they were not ready to distinguish between the two categories. They hadn't learned yet, but they were ready to learn ”. Latent learning studies are still in their infancy, and they need a few more tests to be able to provide us with more accurate information.

Vladimir Sloutsky is however confident for the future.

This is just a small start, which will lead to great things. 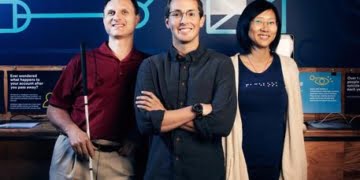 Technology can greatly help blind people to find their way in a complex and sometimes dangerous world ....

5 unusual applications of AI will blow your mind