Per unit area, the company says it captures as much carbon as a rainforest with these desert-grown algae. 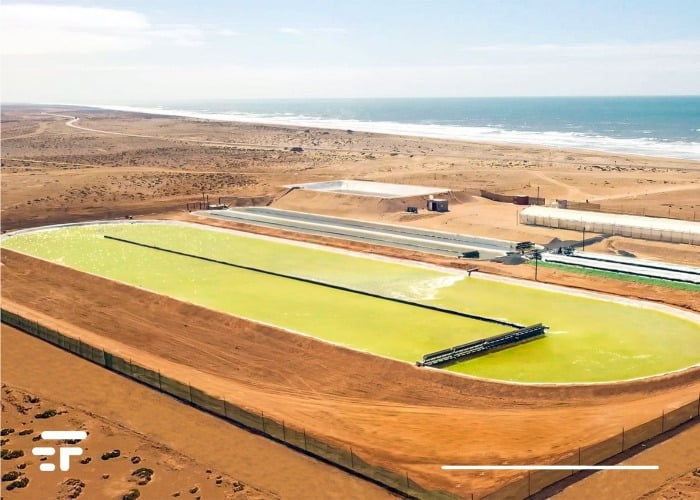 There is a green pond right in the middle of the Sahara Desert, north of Mauritania, nearly 500 kilometers from any settlement. It is the test plant built by Brilliant Planet, a startup that aims to reduce the effects of climate change by growing massive amounts of carbon-capturing algae in the desert.

“We can capture even more CO2 than a rainforest depending on location and season,” he says Raffael Jovine, co-founder and chief scientist of Brilliant Planet. "The difference is that when a rainforest tree is cut down, it returns 97% of the carbon back into the atmosphere, but we don't."

The first commercial-scale plant, which will cover 400 hectares (1.000 acres), plans to remove 40.000 tons of CO2 annually - basically equivalent emissions the use of 92.000 barrels of oil. Enlarged to cover the desert land available on the coasts, the system could hypothetically remove 2.000.000.000 tons (or 2 gigatons) of CO2 per year, if you prefer.

How does the “seaweed factory” in the desert work?

The startup pumps seawater from nearby coasts into the facility: a water rich in both nutrients for algae growth than CO2. Over a period of 18 to 30 days, the algae grow and are filtered by the water (which is returned to the less acidified ocean, helping to solve another problem). At this point, the algae are dried and buried in the sand, storing the carbon permanently: the salty and dry environment will not decompose them.

A fantastic solution, which responds to an absolute need: remove CO2 from the atmosphere it is essential to combat global warming.

Brilliant Planet is the only startup to have focused on this type of approach: the others (many have failed) try to grow algae in expensive bioreactors.

"Basically we took the natural processes, the natural algal blooms, which are the basis of the food chain in the ocean, and brought them ashore on a large scale."

Massive algal blooms occur seasonally in the ocean - Brilliant Planet's system takes the process to land with enormous benefits. One for all? The price: less than $ 50 per tonne of CO2 captured. It is ONE TENTH of the costs of different plants.

For those with legitimate doubts: the startup has been running its test site for almost 5 years to prove that the project works. And this algae growing plant is already the third after the first pilot projects in South Africa and Oman. In 2023 the last test facility will begin, and in 2024 the first real commercial facility will finally begin.

There is half a million square kilometers (more than 300.000 square miles) of coastal and flat desert land in the world, from Africa to South America to Australia.

Space to transform desert into rainforest. Come on boys.

WHO estimates the number of diabetics in the world at 285 million (data from last year): it is almost ...