The DIY invisibility shield developed by some researchers has made a bang on kickstarter: it's all to buy and see ... er 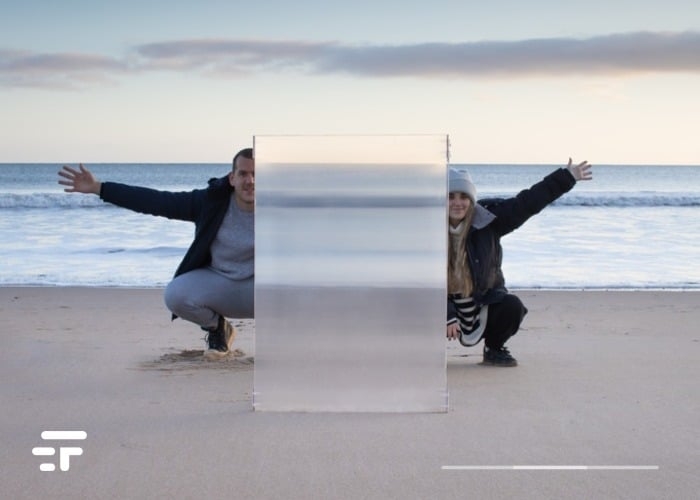 All those science fiction films were not made in vain: the dream of invisibility, after a few more or less clumsy attempts, produced tangible (and affordable) results for the first time.

A team of researchers has created one, or rather 25, fully functional invisibility shield prototypes. How do they work?

I ask for a shield

The shield has five layers of precision lenses and a reflective layer. Each layer redirects most of the light reflected by the subject laterally, making the light coming from the shoulders of the person hiding behind the shield converge on the observer. Do you first see the effect or understand how it works? To you the choice.

What can it be used for? I do not know. You do. It must be said that this "invisibility shield" was not created for protection (you will not find "invisible" cops using it as a riot shield, but I may have already regretted giving this tip). The material, flexible and not rigid, resistant to the sun and temperature, is used only to shield a subject from the view of others.

A history studded with great failures

As I wrote at the beginning of this article, for years the Internet has been swarming with talk about independent producers working to make science fiction a reality and create fully functional invisibility shields. "People were exchanging designs, sharing ideas, and some of us sketched prototypes in workshops and garages."

At the end of 2020, however, everything began to fall silent. I admit I thought two things: either they found a solution so effective that it could be exploited militarily, and then bye, or this stuff can't be done. I was wrong (perhaps in both cases, but on a military level who knows).

This team not only created a rather effective invisibility shield: they also developed a system for its scalability and even its sustainability (the material is completely recyclable). Result? Invisibility at a low price! Do you want to disguise those ugly boxes at the bottom of the garden? Cover them with these panels. Do you want to observe some wildlife in the woods without disturbing? Get behind a thing. Do you want to furnish your home in an unusual way to give it a certain 'nude look'? Take a seat.

The only limit of this shield is the imagination. For everything else there is crowdfunding, find everything on Kickstarter, here.

See you! Indeed no.

Increase telomere length and longevity in mice for the first time, and without any genetic alterations or side effects