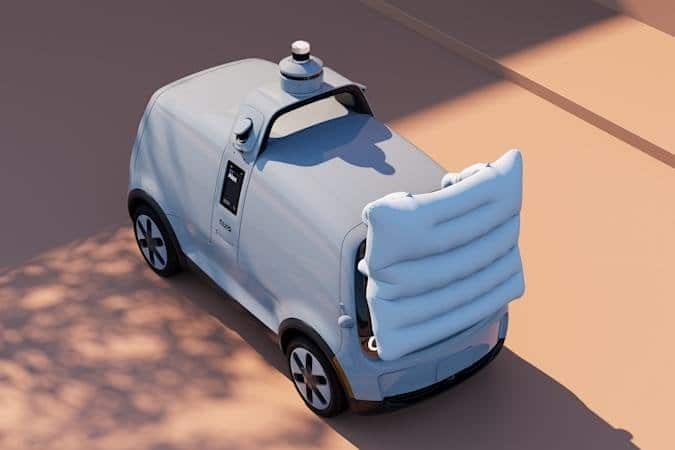 Our Customers already spoken di Nuro, autonomous vehicle for delivery: it is a real test platform for the entire future sector. Today Nuro already has a third version on the way for its driverless deliveries, and this model already suggests in which direction companies will move on the subject of pedestrian protection, as well as on the transport of goods.

The latest version introduced (it has no 3.0 type names or release numbers, it's simply called Nuro), it includes an array of 360-degree sensors including cameras, LIDARs, radars and thermals, but that's not all. In its 'standard' equipment there is also a voluminous external airbag.

Of course, saying "bulky" is perhaps a bit limiting. "Giant" is the proper term. Yes. A giant airbag to protect pedestrians from hospital delivery. We would not risk getting in front of this car anyway (after all, it is still a fall to the ground in the event of a collision), but this should reduce the chances of a serious injury.

The new vehicle also carries double the load and offers both temperature-controlled compartments and modular inserts to help transport a wider variety of goods. Nuro did not say when this latest self-driving vehicle will be ready, but the North American subsidiary of China's BYD will help produce units at a plant that will be fully operational by the end of 2022. One of the investors, shipping company Kroger, is is already committed to the use of this latest version of the vehicle.

The update, although incisive, is also necessary: ​​soon there will be crowds in the sector of autonomous delivery vehicles. Of course, Nuro already has agreements with all the major shippers (and God knows how much war there is between them too). Major brands like 7-Eleven and FedEx will also rely on Nuro.

But what if I told you that the next massive players are called Walmart, Uber or Ford? Obviously the company risks having "opened" the dance by developing a good solution, and then being overtaken in the sprint by someone who developed later, but putting more money into it.

It's the same story, and delivery is no exception. But at least Nuro would be (will be?) Remembered as the first to have thought of reducing impacts and damage to pedestrians: the mathematics says that this case history will increase.