The Air Yacht concept is a futuristic vision of an airship object that travels on water or in the air with two durable helium balloons. 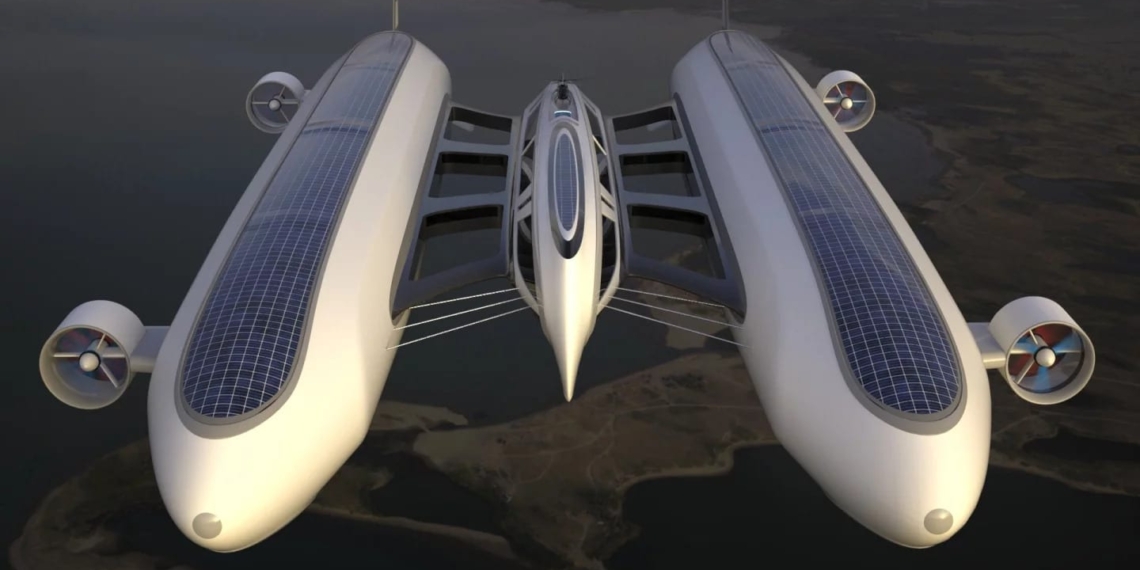 Pierpaolo Lazzarini, famous Italian designer, has recently announced his latest project. The Air Yacht, the catamaran that transforms into an airship, could soon be presented to the public.

Lazzarini's passion for the world of yachts is certainly not a secret, and several previous works prove it to us.

Le capsule yacht we have talked about in the past, superyachts inspired by swans, even the hydrofoil spheres that 'fly over water'.

The designer has been able to give free rein to his creativity, launching himself into one challenge after another. So let's see his latest project, and what characterizes the modern Air Yacht.

The Air Yacht has been defined "airship catamaran"This is because it has the same shape as a catamaran, to which two 150-meter-long airships were then added. Both structures are connected by an 80-meter-long central deck, which contains the main cabin.

Each of the airships contains five en-suite cabins, with windows looking directly into the sky. A transport giant, which will allow you to live a truly unique travel experience.

The Air Yacht manages not only to hold up in the sky like a real plane, but it is also capable of land directly on the water.

Upon landing in the water, an "inflatable base" keeps the structure afloat and allows it to travel at a speed of 5 knots (9 kilometers per hour).

The future of the yacht

The draft Lazzarini aims to meet the hearts of individuals, rather than tour operators.

An object of similar power to the Air Yacht needs a good initial investment capital, and requires the right level of experience. We are therefore talking about a fairly limited market, but no less interesting for this.

The catamaran airship invented by the designer could lead to an overall victory, as well as an excellent monetary feedback.

In the coming months we will discover the progress of the project; for now, let's enjoy the beauty of Air Yacht, a one-of-a-kind airship.