Scientists are experimenting with a new method of predicting the arrival of tsunamis, hoping to help as many people as possible

What if there was a way to predict the arrival of tsunamis? To really predict it, just enough to warn everyone and allow them to evacuate safely?

According to the scientists, the answer lies in the magnetic fields generated before the start of the phenomenon, before sea level rise.

By analyzing in time the presence of magnetic fields, it could be possible to predict the arrival of the tsunami at least a few minutes before the retreat of the waves, anticipating the disaster.

What may seem like a small difference on the surface has the potential to save countless lives. Above all, panic would be avoided, and people would remain calmer.

To be completely transparent, it is true that we have long been thinking about the possible link between the magnetic field data and the arrival of tsunamis.

However, until now no experiments had been carried out measuring the simultaneous increase in magnetic field waves and sea level.

Predicting Tsunamis: Is It Really Possible?

In their latest observations, the researchers noted that the values ​​for sea level change agree with the magnetic data.

According to the geophysicist Zhiheng Lin, a researcher at Kyoto University in Japan, there is a close correlation between increasing magnetic activity and rising seas.

The team looked at data collected from two tsunamis, which took place in two different locations:

The numbers confirm that the magnetic field from the tsunami's generating waves arrives before the waves themselves. This means, that the values ​​can be used to predict the height of the waves, helping people prepare for the right way.

According to the research results, the magnetic field becomes easier to detect in relation to the depth of the water. The deeper the sea, the longer it takes to get a correct disclosure.

Being able to obtain preventive information about the probability of tsunami formation would help the areas at risk to keep the situation under control.

This is what Neesha Schnepf, a geomagnetics researcher who participated in the study on magnetic fields, reports.

Il Journal of Geophysical Research published the research of Neesha Schnepf's team, giving us information on what was discovered about the tsunamis.

The result obtained provides us with an additional tool for the prevention of natural disasters. In particular, it gives us hope on an extremely destructive phenomenon, which has hit and ruined many coasts.

The fundamental problem, what prevents us from fully enjoying the discovery, is the lack of resources.

Not many observation stations are set up to record this type of magnetic field data. In addition, the readings only work at a certain depth, when the noise of the coast is far enough away.

According to the research teams, the possible results would be worth the investment needed to get the right equipment.

We have to wait to find out what decisions the observation stations will make. 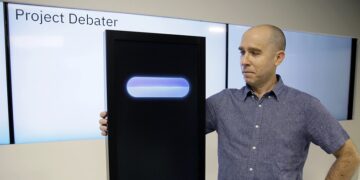 An epic challenge for engineering and research shows the first results: Project Debater is an artificial intelligence capable of ...