A study on the second closest planet to the sun shows that the presence of water inside the mantle could be a constant, there and elsewhere.

Venus, you know, it is a violent and inhospitable planet. With its thick, toxic atmosphere overflowing with carbon dioxide, it is enveloped in yellowish clouds of sulfuric acid that trap all of its heat. Inside, pressures and temperatures rise to instant death levels for a human. Yet, as my grandmother used to say, “if you look for the log on, scratch under the ashes”. There may be hope beneath this infernal crust.

According to a recent study shared on a prepress server, the interior of Venus could host oceans of liquid water. Oceans trapped in the planet's mantle, which could come out in the form of boiling vapor ready to condense.

This does not mean, of course, that Venus can be "terraformed", and it probably never will. If we find a way to tap into this immense reservoir of water locked within it, however, our understanding of the planet could change forever.

How the "internal oceans" of rocky planets are formed

In Earth-like rocky planets, the distribution of volatile elements such as carbon (C), hydrogen (H) and oxygen (O) in the primary planetary components (core, mantle and atmosphere) determines the formation and development of its atmosphere. As a planet is hit by meteors and other resource-rich bodies, the iron core and an ocean of hot magma are formed around it. Think about the simulations of the Earth hit by a giant asteroid: colossal oceans of magma pour from within through the affected crust, like blood gushing from a cut.

The researchers examined the evolution of ocean-atmosphere magma systems under a number of conditions. Their calculations determined that the complex reactions that occur when a planet's magma is exposed prevent it about 75% of the water contained within it to escape into the atmosphere. It is a condition that can slow or prevent the formation of oceans on a planet's surface.

In earth-like planets, oceans of water could be trapped in the inner mantle

According to the research, a large portion of the water deposited on rocky planets such as Venus during their first years of formation could be trapped inside during the "magmatic ocean phase". On very gradual geological time scales, this water could escape, partially or completely changing the composition of the atmosphere.

"Ultimately, the high solubility of H2O in magma oceans may allow for its safe storage during the tumultuous phase of planet formation," the study authors conclude. While this does not imply that oceans will form on Venus as on Earth, this fact is important. It indicates that the presence of water in the rocky planets could be a constant.

On the surface or underground. 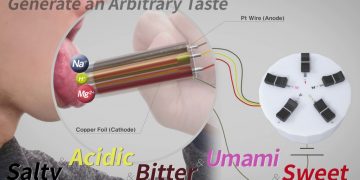 A device as large as an electronic cigarette will be able to reproduce all the flavors we want, without using food or calories. Here ...