Our clothes will speak to us, leaving our hands more and more free from devices. PocketView is just the latest in wearable display research. And currently it is the best.

Smart displays that show information through clothing fabric could be the next wave of wearable technology.

The new technology, which researchers call PocketView, use LED lights to display basic information. It can function as a standalone piece of technology or it could be incorporated into existing or next-generation smart clothing and devices.

I ricercators they developed an innovative display that shows information through clothing and other fabrics. The team produced prototypes that mimic smartphones, pens, key chains and other shapes and sizes - the display shines through clothing to show notifications by email or messages, times, weather or other basic information.

“The idea isn't to show all the information you would normally see on your smartphone display,” he says Antony Albert Raj Irudayaraj, Ph.D. researcher at the University of Waterloo. “These are displays that show minimal information. Useful if you ride a bicycle to see navigation instructions, or to peek at message notifications without taking your attention away from what you are doing ”.

The prototypes are obviously Bluetooth-enabled, which means they sync with existing devices.

The new visualization technology was developed by a team of researchers working in the field of human-computer interaction. One of their goals is to create everyday consumer devices: for this reason the team conducted a mass public survey to choose the design of the prototypes.

"Some of the survey results challenged us to rethink the size, shape and functionality of displays," he says. Nikhita Joshi, which is part of the team. “Different sizes are important because many women's dresses have tiny pockets. A phone in the front pocket can be uncomfortable, these displays offer more options. We have created a whole variety of form factors to suit all types and sizes of clothing ”.

Another key point of the new display technology is that it is relatively inexpensive, and could quickly be implemented on a large scale.

Other wearable display research focuses on creating new high-tech clothing, while PocketView can also work with clothing people already have.

Clothes and habits of the future

“Obviously, we're focused on the technology and programming side of the invention,” he says Daniel Vogel, associate professor of computer science at Waterloo.

“Even just as a fashion accessory, it's something people have told us they want. People will use it in clubs, to play sports, in a thousand other contexts. It's such a simple but radical thing that it has the potential to become part of everyone's daily habits ”.

What do you think? Will we go dressed in information? 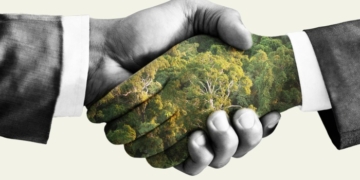 In 2021 the 'green' sector gained jobs while the fossil sector lost them. An ecological transition ...