The EU wants to ban the use of global surveillance with facial recognition to identify people not suspected of crimes.

In the vote on Wednesday in the European Parliament, 377 deputies they supported a resolution which restricts law enforcement's use of facial recognition. 248 voted against and 62 abstained, for the record.

“AI-based identification systems already misidentify minority ethnic groups, LGBTI people, the elderly and women at higher rates. This is particularly worrying in the context of the surveillance of law enforcement and the judiciary, ”reads a statement by the parliament.

To ensure that fundamental rights are respected when using these technologies, algorithms should be transparent, traceable and sufficiently documented. Where possible, public authorities should use open source software to be more transparent.

It is good news that most of the EU political representatives have made this assessment. Who doesn't want to use facial recognition in automatic mass surveillance of people in public. Monitoring should be limited only to those who are believed to have broken the law. Data sets accumulated by private companies, such as Clearview ai, to identify citizens. It would be useful to prevent, in truth, even the systems that allow policemen to predict offenses from people's behavior and background.

Here is what the EU Parliament said about facial recognition and mass surveillance:

"Fundamental rights are unconditional," he says Peter Vitanov, MEP representing the Bulgarian Socialist Party. "For the first time ever, we are calling for a moratorium on the implementation of facial recognition systems for surveillance and law enforcement purposes, as the technology has proven ineffective and often leads to discriminatory results."

We are clearly opposed to predictive police based on the use of artificial intelligence and any biometric data processing that leads to mass surveillance. This is a great victory for all European citizens.

The vote is not binding, and therefore cannot directly lead to any legislative changes. It was promoted to "take the pulse" of the European Parliament, and to understand if members could support upcoming laws such as the AI ​​Act. Among the intentions, also that of banning biometric data at border controls to track travelers in Europe.

The failures of a still incomplete technology

The growth of these surveillance algorithms happened very quickly, and with an incomplete dataset, to be generous. Facial recognition discrimination is the order of the day (think of the person identified as a "monkey" by a Facebook algorithm). People of color are currently much more likely to be misidentified by the facial recognition authentication mechanism. And there is one that does it cooked and raw: it is the Uber algorithm.

A Black Uber driver in the UK, who lost his job after being blocked by the running call app when his facial recognition system failed to identify him, is taking legal action against the tech giant. It will be supported by the Union of Independent Workers of Great Britain (IWGB), which has called for a strike of 24 to demand changes in the modus operandi.

"Uber's continued use of a facial recognition algorithm that is ineffective on people of color is discriminatory," he said. Henry Chango Lopez, general secretary of the IWGB. 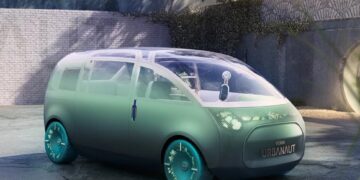 Mini Vision Urbanaut is a concept full of utopian fantasy, but for future urban mobility it is like a score ...