The incredible discovery can change the way we think about how some of the first humans created tools like these.

di Gianluca Riccio
in The future of yesterday
Share23Pin6Tweet14SendShare4ShareShare3

For the archeology of the lower Paleolithic, this is a great coup. Experts have made a remarkable discovery: 98 elephant bone tools at a site dating back to around 400.000 years ago. This discovery could change the way we think about how some early humans, such as Neanderthals, created tools like these.

The discovery of these bone tools was made in Castel di Guido, a town near Rome. In the dark and distant past, Castel di Guido was a very popular place for the now extinct elephant with straight tusks (palaeoloxodon antiquus), and a considerable number of animals died there.

This newly identified collection of tools shows that the ancient Castel di Guido hominids wasted no bones. Far from it. The discovery shows that they created a real production line, with methods that have never been associated with that historical period.

“Ci sono anche altri siti con strumenti ossei di questo tipo”, dice l’archeologa Paola Villa, of the University of Colorado Boulder. “But there is not this variety of well-defined forms. At Castel di Guido, humans broke elephant long bones in a standardized way to make bone tools. This kind of attitude did not become common until much later ”.

Based on evidence gathered from other sites, early humans usually limited themselves to using whatever bone fragment available, without refining or adapting it, but in Castel di Guido it was different.

The technique they used is known as percussion flaking, or chipping of bone fragments with a separate tool to create specific tools. At that time, stone tools were more widespread, so the discovery of these bones was surprising for archaeologists.

This discovery does not imply that the ancient humans at Castel di Guido were particularly "intelligent," the researchers note. The explanation could simply be that they had far more elephant bones to work with than other groups and less access to large pieces of natural flint to make stone tools.

Tools of all kinds

One of the most interesting tools of this discovery is the so-called lissoir: a long, smooth bone at one end, which would have been used to treat hides. These types of tools did not become common until around 300.000 years ago.

Should history be rewritten after this discovery?

Given the diversity of the types of tools here and the techniques used to create them, the discovery is sensational. Archaeologists may need to recalibrate timelines to review when these tools and their production methods were originally developed.

For now, though, this looks like an isolated snapshot of bone-making technology. We'll see if other examples are found.

was published on PLOS One. 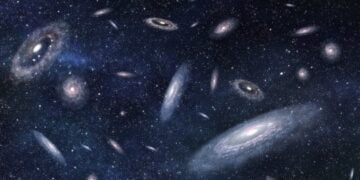 The use of machine learning allows for greater detail in the dark matter map based on galaxy data. And reveals ...