The faces of three men who lived in ancient Egypt over 2000 years ago have been made available to the public. Based on the DNA data extracted from their mummified remains, there are three impressive digital reconstructions.

The mummies come from Abusir el-Meleq, an ancient Egyptian city on a floodplain south of Cairo, and were buried between 1380 BC and 425 AD Scientists from the Max Planck Institute in Tübingen, Germany, sequenced the DNA of the mummies in 2017; it was the first successful reconstruction of the genome of an ancient Egyptian mummy.

Today, researchers from the Parabon NanoLabs, a DNA technology company in Reston, Virginia, used that genetic data to create 3D models of the mummies' faces. Like? through a process called forensic DNA phenotyping, which uses genetic analysis to predict the shape of facial features. and other aspects of a person's physical appearance.

"This is the first time that complete DNA phenotyping has been performed on human DNA of this age," said Parabon representatives. in a note.

The scientists used a phenotyping method called Snapshot to predict skin color and facial features. They found that the men had light brown skin with dark eyes and hair. overall, according to the statement, their genetic makeup it was closer to that of modern individuals in the Mediterranean or the Middle East than that of today's Egyptians.

The researchers generated 3D models that outline the facial features of the mummies. They then calculated heat maps to highlight the differences between the three individuals and refine the details of each face. Parabon's forensic artist finally combined these findings with Snapshot's predictions of skin, eyes and hair color.

From the DNA of the mummies to their faces

Working with ancient human DNA can be difficult for two reasons: First, it is difficult to extract. The other problem is that it has often been degraded due to factors such as environmental influence or various forces. Ellen GreytakParabon's director of bioinformatics believes that since much of the DNA is shared among all humans, it is only necessary to analyze small dots in the genome. These are the points that make people different, known as single nucleotide polymorphisms (SNPs). Many of these SNPs code for physical differences between individuals, Greytak said.

The processes used on these ancient mummies could also help scientists recreate faces to identify modern remains, improving forensic science. Of the roughly 175 cold cases that Parabon researchers have helped solve using genetic genealogy, 9 have so far been analyzed using the techniques in this study. 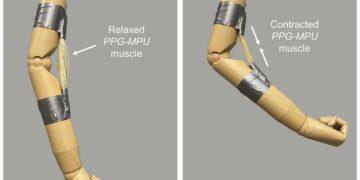 Will robots be able to rely on muscles based on shape memory polymers? These materials are showing very promising results.