Research on asteroids in our solar system detects celestial bodies with complex organic matter that simply shouldn't be there. 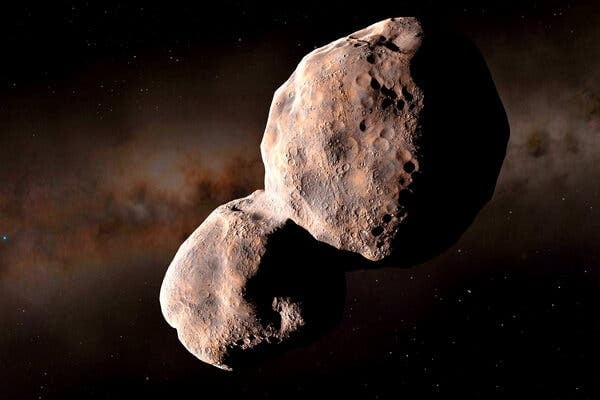 In an investigation recently published on the asteroid belt between Mars and Jupiter, a group of scientists from around the world have discovered something in our Solar System that they say simply shouldn't be there. It is a pair of dark red rocks apparently covered with "complex organic matter".

"Two asteroids (203 Pompeja e 269 ​​Justitia) were discovered with a redder spectrum than any other object in the asteroid belt between Mars and Jupiter, "says a statement from the Japanese Aerospace Exploration Association (JAXA). According to the same press release, "spectroscopic observations suggest the presence of complex organic matter on the surface of these asteroids".

Among the most fascinating concepts underlying the origin of life on Earth is the panspermia. It is the idea that life evolved somewhere else before arriving on our planet via comets, asteroids, or other interplanetary bodies (some even claim through extraterrestrial biological entities).

Recently, the idea has gained some attention. By all accounts, this latest discovery by the JAXA-led team strengthens the thesis, adding that this life could come not so far away. but even from within our own solar system.

Usually similar types of asteroids (and larger space rocks known as planetesimals) originally formed beyond our farthest planet Neptune, at the very edge of our solar system. According to the study authors, these distant objects often have complex organic matter on their surface.

Right objects in the "wrong" place

The complex organic matter found on these two "transient intruders" unearthed by the international team gives them this dark red color. Until now, this particular class of space rocks covered in complex organic matter was thought to have remained beyond Neptune, never having had the opportunity to reach Earth and seed it with those organic compounds. However, these latest findings appear to challenge this notion.

The group, led by Hasegawa Sunao of JAXA is supported by an international team of researchers from MIT, and the Universities of Hawaii, Seoul, Kyoto and Marseille. The team initially focused on 203 Pompeja. And what they found, they say, was completely unexpected.

More red than ever

"In the spectroscopic survey, we found that 203 Pompeja, with a diameter of 110 km, has a redder spectrum even than that of type D asteroids," the statement said, noting that the unexpected rock was redder than the normally red asteroids. . found in this region.

That discovery, they say, led them to look at previously recorded data to see if 203 Pompeia was alone, or if other renegade space objects covered in complex organic matter, a critical ingredient for life, had somehow moved out of the solar system. external to the internal asteroid belt.

Such a discovery, the statement states, would run counter to traditional solar system formation models. It would align with newer models. Models suggesting how the movement of Jupiter-like planets in the early Solar System caused the gravitational field to shift and mix.

Pompeja is not the only one

With the incredible data obtained, the team took another look at the previously recorded data. Surprisingly, he found another match.

“Examination of past observations revealed that 269 ​​Justitia, with a diameter of 55 km, it has a redness similar to that of 203 Pompeja, ”the statement said. "This supports evidence for a new model of solar system formation."

The discovery, as mentioned, is completely unexpected. It almost certainly means that these space rocks formed outside of Neptune's orbit anyway, then approaching the Sun and Earth. "To present this complex organic matter it is initially necessary to have a lot of ice on the surface", he recently told the New York Times one of the authors of the article, Michaël Marsset.

This is why the asteroids we observed must have formed in a very cold environment. The subsequent solar irradiation of the ice created the complex organic matter they now present.

Is the solar system full of complex organic matter, and therefore life?

Neither biologists nor astronomers are 100% sure how or where life on Earth began. But almost everyone agrees that complex organic matter is among its most fundamental ingredients. According to the team behind this latest discovery, discoveries like this one could contain at least one key piece of the answer. And without the cost of a spacecraft flying over there to take a look.

Of course, the study authors don't exactly rule out sending a spacecraft on the nearly 5 billion-kilometer journey in search of the origin of life. They even went so far as to say: “this is worth considering these asteroids with complex organic matter as a possible future space mission”.

There is also enough for a good Hollywood film on the subject.