A home pesticide purifier? The world has turned bad, and Garrnish (this is his name) may be a sensible idea. 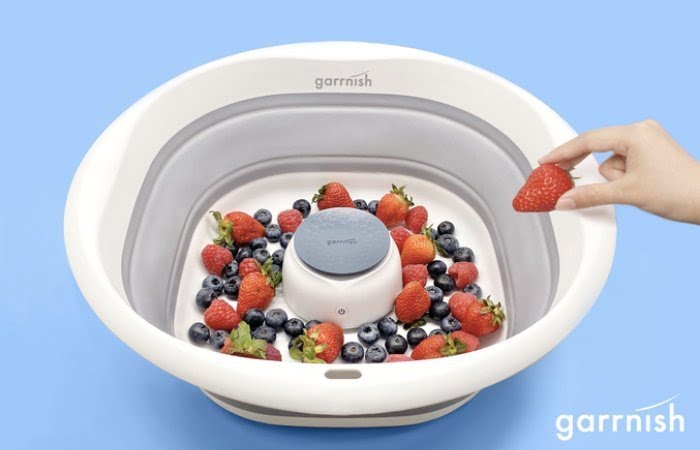 Organic fruit and vegetables are not always available, and buying those packaged or in the supermarket provides little guarantees of healthiness. Quite the opposite: the logic of the market is often combined with a poor yield, including herbicides and pesticides.

For this reason I find this new "pesticide purifier" called Garrnish interesting. A home device designed to remove 90% of common pesticides from fruit and vegetables.

Launched via the crowdfunding Kickstarter and thanks to over 600 supporters, the Garrnish purifier allowed its creators to increase the amount initially required to transform the concept of a mass product tenfold.

Almost all fruit and vegetables are coated with pesticides even after washing them. Regular washing methods are not effective enough. The Garrnish Pesticide Purifier is a revolutionary way to remove more than 90% of common pesticides, and 99,9% of Chlorpyrifos and Dichlorvos pesticides from fruit and vegetables. The future of clean eating is here!

From the company's statement on Kickstarter

How does the Garrnish Pesticide Purifier Work?

Despite marketing claims, wash and spray products have often proved ineffective in removing pesticides. They even tend to leave residues.

The principle behind the Garrnish purifier is simple, and you know it for sure: it's called electrolysis.

Electrolysis it is the process that divides water molecules into (H +) and (OH-) ions, producing tiny microbubbles that fill the basin. This electrolyzed water creates an alkaline environment and, together with the existing chlorine in tap water, breaks down the benzene ring, or molecular structure of chemical pesticides, turning them into harmless non-toxic substances that are easily washed off with water.

Garrnish has now started the presale with the first deliveries starting in September 2021. If that makes sense to you, take a look at the official page of the public funding campaign of this pesticide purifier on Kickstarter.