A newly published study tries to shed light on near-death experiences, described in detail by people who are in extreme danger of life.

Ending on the brink of death and going back is a journey that few people undertake, to the point that these so-called "near death" experiences remain a mystery.

The new research suggests that some near-death experiences may be related to an archaic animal survival strategy called thanatosis. In the paper, the researchers put together a series of evidence. Together, they highlight the thanatosis as the evolutionary foundation of near-death experiences. The study was directed by the neurologist Steven laureys of the University of Liege in Belgium.

What Happens in NDEs?

After touching death, some people describe some sort of out-of-body experience. A complex of sensations: a distorted sense of time distorted, the vision of bright lights and sometimes a sense of peace and acceptance. These near-death experiences typically occur when someone is near death. Not infrequently they also occur in life-threatening conditions, during intense physical or emotional pain or stress. In some cases during a heart attack or an encounter with wildlife.

Some of the brain mechanisms that have been linked to near death experiences are not unlike those underlying thanatosis, say the researchers in the paper, which essentially explores the correlation between the two phenomena.

We think that the brain mechanisms underlying NDEs have evolved from thanatosis because they offer a survival benefit during predatory attacks.

From an excerpt of the paper

In previous research, by the same team of neurologists, up to 1 in 10 people reported having had a near-death experience. Other data suggests it could be between 4 and 15%.

The question, for this group and their systematic evolutionary investigation, was how many (if any) near-death experiences typically involve a predatory threat and resemble thanatosis, a survival strategy of last resort. There are several approaches (but still no definitive explanation) that attempt to make sense of these strange near-death sensory experiences. Some are scientific, many are religious, and others have cultural connotations.

From a scientific point of view, Near-death experiences (NDEs) could be triggered by anesthetic drugs, lack of oxygen, dying brain cells, or endorphins released in times of high stress, but none of these explain the full range of experiences recorded.

Regarding thanatosis in humans, it has been described as a possible defense mechanism that is activated during traumatic events, such as sexual assaults or gun violence. People may have a "sudden onset of stillness" and enter a state of dissociation which helps them cope with the situation. It sounds a bit like the dissociation reported in some near death experiences.

The near death phenomenon among animals ...

By examining the scientific literature, the team found 32 published articles describing thanatosis throughout the animal kingdom, in insects and reptiles, birds and mammals (but not great apes).

Next, Peinkhofer and colleagues analyzed near-death experience cases in a database with testimonials of about 630 people.

The researchers were particularly interested in cases where a near-death experience involved a predatory threat - an oncoming car in a traffic accident or a wild animal, for example. The aim was to see if there might be some kind of thanatosis-like survival benefit associated with the manifestations described by those who have experienced near death.

The correlation between predatory threats and near-death experiences, however. it occurred in only 90 cases (about 14% of the total), which means that drawing firm conclusions is quite difficult. Most of the cases were actually related to cardiac arrest, anesthesia or fainting.

When the near death corresponds to the thanatosis

Looking more broadly, the team also found a handful of near-death experiences documented in news articles and historical sources. Like the case of a person being attacked by a grizzly bear: “When I decided that the only option was to pretend I was dead, I simply passed out. Like a rag doll, I didn't move a muscle, I didn't move an eyelid, ”the reports read.

Peinkhofer and colleagues speculate that near death experiences like this suggest an overlap with thanatosis, also known as tonic immobility.

We hypothesize that the human brain's increased sophistication and language acquisition enabled humans to record and share their experiences in detail with others, thus transforming these events from relatively uniform tonic stillness into rich perceptions that form experiences near death

Extract from the conclusions of the research

So what have we learned?

While an evolutionary link between thanatosis and near death experiences may be possible, it seems a bit tenuous at this stage, based on this study, which brings together various publications and data sources. Not only that: it would also be quite limited, only to situations where people feel threatened by a predator.

“Since humans no longer have natural enemies,” the study concludes, “in most life-threatening (or perceived as such) situations NDEs are unlikely to have a specific biological purpose or their benefit may be less obvious. .

Which, in other words, leaves the mystery intact.

The study was published in Brain Communications . 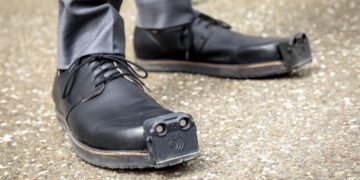 A special shoe with ultrasonic sensors positioned on the toe is about to be enriched with a camera. Feet become tools for ...