Sea level rise is not a hypothesis. It is already underway, and it will increase. There are things we need to do to adapt, but we need to fly high. Literally. 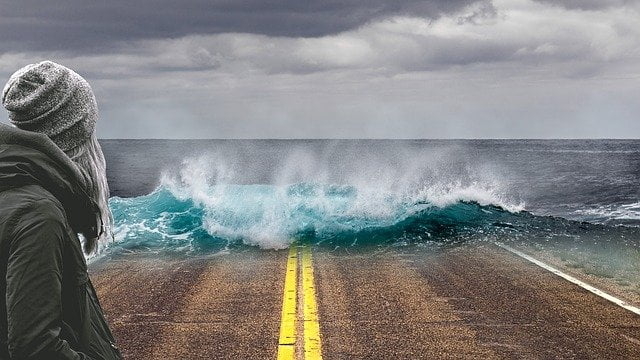 Rising sea levels will wipe out entire cities and render homes, buildings and streets unusable. Here are the key design strategies to adapt to a phenomenon that now seems unstoppable.

The climate and the oceans have warmed beyond the point of no return. According to the oceanographer John Englander and many other scholars there is nothing we can do to stop the melting of the Greenland and Antarctic ice sheets.

Sea level rise is now inevitable. By the end of this century, the sea level could be 3 meters higher than it is today.

The impact on society of this sea level rise will be immense.

The shoreline as we know it will be completely remodeled, flooding tens of thousands of coastal communities around the world and rendering millions of homes, buildings, roads and other infrastructure useless or unusable.

Some coastal cities could see floods every day within less than 30 years. Cities like Miami, New Orleans, Copenhagen and Shanghai could be virtually canceled.

“It's pretty bad,” Englander says. "But it's also a design challenge."

We need to start designing right away

We need to start planning and designing today for this massive upheaval. Engineers, planners, architects and policy makers, financiers and insurance companies must mobilize.

Once you understand that we could have meters of elevation within a few decades, you realize that you cannot wait for the water to arrive.

“We need to change the infrastructure, where the ports and airports are and how coastal development takes place,” says Englander. “At the moment we are thinking small. We are installing pumps and raising the streets 50 centimeters at a time. We have to think big. "

Englander offers a number of strategies for rethinking coastal communities in the near future with much higher seas.

Sea rise is already underway and will increase much faster in the decades to come, Englander says. “The sea level in the last century has risen by about 20 centimeters. And this happened quite gradually, to the point that we didn't really notice. But it is accelerating. Over the past 30 years it has almost doubled every decade. We are already in a new reality ”.

Rising ocean temperatures mean that melting will continue to increase. THE changes in the Gulf Stream they are another sign of the changes taking place.

“The planet has already warmed by one degree centigrade. We are trying to limit the overheating to another degree Celsius and most scholars are starting to doubt that this is possible, ”Englander says. “But even if we could respect the Paris agreements, we will still have a sea level rise. The fact that sea level rise is unstoppable is the first thing we must accept ”.

Think of the hinterland and rethink the coast

Several meters of sea level rise will put parts of many cities underwater.

Recognizing this and mapping the areas most likely to be affected will help governments and planners understand if and how existing development will have to adapt. For some places, this may mean elevating structures.

For others, it may mean abandoning entire parts of cities and retraining on more internal and higher altitudes. Relocations that could be difficult, especially for those that could already be marginalized.

Much more than roads and power grids

Coastal infrastructure is vital to many national economies.

We cannot abandon the coasts, in any case. We need to garrison these, and build the next coasts. They are used for ports, for fishing, for hydroelectric energy and for the cooling of industrial plants.

Therefore, as the seas rise, it will be essential to redesign and rethink these coastal infrastructures.

Plans to manage the rising seas in the coming years: the case of Boston

Englander says governments, planners and developers need to think not just about sea level rise over the next 20 to 30 years, but what could happen in the next century. There is a functional duration of 100 years to be considered for large infrastructures such as highways, viaducts, fortifications, subways.

The same long duration applies to cities, and planners are starting to consider rising sea levels when outlining long-term plans.

Le design guidelines in the city of Boston, for example, are already accounting for up to 1 meters of sea level rise today. It is probably the most forward-looking plan at the moment. Among the "forward-looking" projects there are even daring scenarios in which some roads can become navigable canals.

Beyond Boston, the example of Singapore (avant-garde also for other things), where the government has demanded that the construction of a new airport terminal be at least 5 meters above sea level.

Adaptation and reconstruction efforts don't have to happen all at once. Englander suggests engineers and builders think about the concept of adaptive engineering or design a project today so that it can be easily modified or adapted even many years from now.

Let's take a new bridge, for example. Given sea level rise over the next few decades, that bridge would likely be designed to accommodate at least 1 meters of potential rise. We need to build the foundations right now so that it can support a taller structure.

Also because the cost of raising a building by one and a half meters is much lower than that of raising it by three meters.

If designed for later adaptation, these designs could be adapted when the pace and scale of sea level rise so require. Because whether we are ready or not, the sea level will significantly change what we now know as the coast.

The rising of the sea will not stop. There is no alternative to melting ice and rising sea level meters.

This will be the story of this century.

It is not the first and will not be the last. Scientists from the University of Groningen (Holland,) and from the Empa research center ...