A research team uses sophisticated X-ray machinery to virtually "open" and decipher letters from the Renaissance. 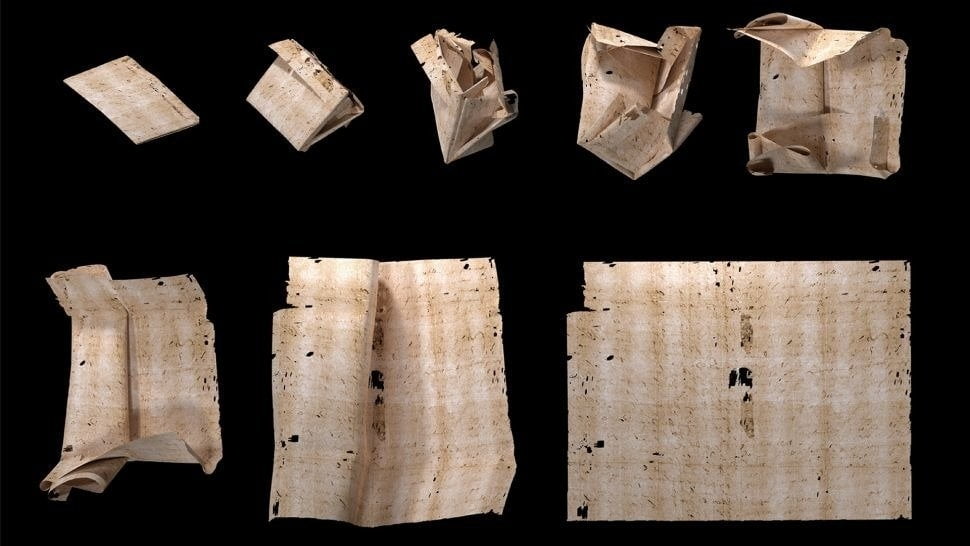 More than 600 years ago someone folded, sealed and published a letter that never reached its destination. Now, scientists have digitally "explained" this and other letters locked in a XNUMXth-century trunk found in The Hague, using X-rays.

For centuries before the invention of sealed envelopes, sensitive correspondence was protected from prying eyes through complex folding techniques that transformed a letter into its secure envelope. In the Renaissance a letter was folded in a way that origami is a joke in comparison. Letter and casket became one.

The "blocked" letters of the Renaissance

The stuck letters used different mechanisms to stay firmly closed. Folds and rolls, slots and holes, folds, stickers and a variety of cleverly constructed "paper locks". A large study of these closure methods was published online yesterday in the journal Nature Communications .

The downside to this closing mode, however, is great. Letters from this period that survive the present still closed are very fragile, and can only be opened by cutting them. Fortunately, a new X-ray-based method has offered researchers a non-invasive alternative. With this technique, the scientists were able to recover letters while still holding them folded, without having to open them.

Dear Renaissance friend, I read you

For the first time, scientists applied this method to a group of "blocked" letters from the Renaissance, stored in a trunk that had been in the collection of the Dutch Postal Museum in The Hague, Holland, since 1926.

The contents of the trunk includes more than 3.100 undelivered letters, of which 577 unopened, written in Dutch, English, French, Italian, Latin and Spanish. For unknown reasons, once they arrived in The Hague, the letters were never delivered to their intended recipients and have been preserved instead by a postmaster named Simon de Brienne.

The missives of the Renaissance

To penetrate the layers of folded paper from the Renaissance, the study authors used an X-ray microtomography scanner designed in the dental research laboratories of the Queen Mary University of London (QMU).

The researchers designed the scanner to be super sensitive, having the task of mapping the minerals contained in a tooth. "It was important to use such an instrument, which is invaluable in dental research. This high sensitivity made it possible to read some types of ink on paper and parchment," he said. said in a statement on co-author of the study Graham Davis, QMU Professor of 3D X-ray Imaging.

The team was able to take our scanned images and turn them into letters that they could virtually open and read for the first time in over 400 years.

David Mills, co-author of the study

The "digital" opening: what is written

From the scans, the team derived 3D digital reconstructions of the letters. He then created a computational algorithm that deciphered the sophisticated folding techniques, fold by fold, opening the letters of the Renaissance in a virtual way. Four letters have already been opened, and the contents of one have already been deciphered.

It was written on July 31, 1697 by a man named Jacques Sennacques to his cousin Pierre Le Pers, who lived in The Hague. Sennacques, a legal professional in Lille, France, asked for an official death certificate for a relative named Daniel Le Pers. "Perhaps due to a matter of inheritance," the scientists wrote.

After his request, Sennacques asks for news of the family and recommends his cousin to the graces of God.

Tens of thousands of sealed documents like this one from the Renaissance (and other eras) can now be opened and read virtually. A striking result, which comes following another famous revelation: that of a group of papyri from Herculaneum.

This algorithm takes us directly to the heart of a closed letter. The virtual opening to read a story that has never seen the light of day (it has never even reached the recipient) is truly extraordinary.