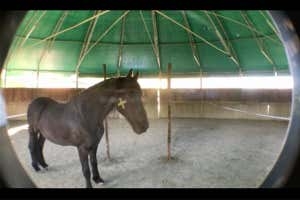 A study confirms this: Horses not only recognize themselves in the mirror, but can even use the information in their reflection to recognize stains or marks for cleaning.

Eleven horses out of a group of 14 tested tried to rub the colored markings off their cheeks after discovering them in the mirror.

This would make them the only animals, other than primates, capable of self-recognition in the mirror, he says Paolo Baragli of the University of Pisa.

Self-recognition was previously detected in some other species (elephants, bottlenose dolphins, magpies) but in very small groups, which did not allow to confirm whether the species as a whole have this ability.

For horses this seems to be a general feature.

I'm starting with the Horse in the Mirror, Michael Jackson would say

Baragli and his colleagues set up a large mirror standing in an indoor arena and set 14 horses free, one at a time, in the open space. Initially, everyone treated their reflection as if it were another horse. Some tried to play with the "other horse," and some were afraid or even aggressive towards him, says Baragli.

After this initial reaction period, which varied from one animal to another, most horses changed their behavior and began to investigate. A bit as if they wanted to "test" to see if the horse in the mirror was actually a reflection of themselves, says Baragli.

Eleven of the horses checked behind the mirror and tested their reflexes by moving their heads. Some even showed the language.

Second phase of the horse test

The researchers then used a medical ultrasound gel to mark the cheeks of the 11 horses. The horses could not see him except in the mirror. A visible sign, a beautiful "X".

The horses recognized from their reflection that they had something on their faces and wanted to understand more, or remove it.

Doubts about the results

The developer of the tests Gordon Gallup of the University of Albany in New York, considers Baragli's conclusions "dubious". He disagrees, in particular, that the horses were really investigating their mirror images. This kind of "self-directed" behavior is an important factor in research.

Baragli keeps his conclusions based on 22 hours of video, which includes multiple instances of horses looking at each other, rubbing their faces, and looking in the mirror again. “They are trying to explore the mark on their face or take it off,” he says. "It is difficult to imagine that there is another reason for this behavior."

I don't know if this proves that horses are self-aware. That they see themselves as individuals, that they are aware of their uniqueness.

But self-recognition in one mirror it is certainly an important "building block" of self-awareness. 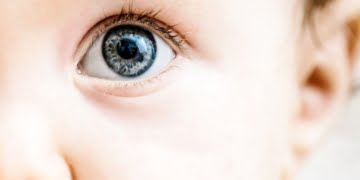 The futurologist predicts in her latest book written with a geneticist that being a parent could have very different dynamics in ...