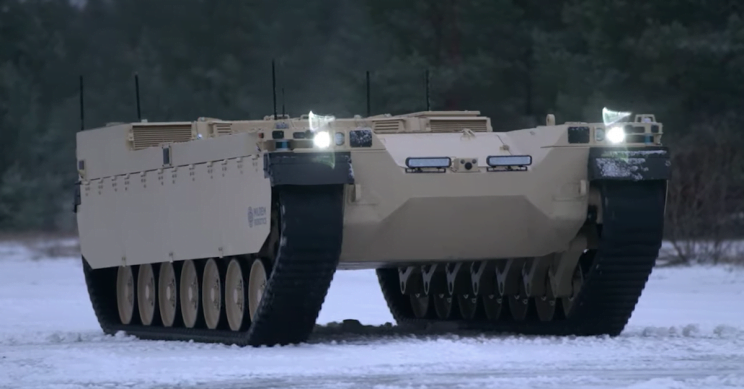 First announced in the summer of last year, the Type-X RVC robotic tank was designed to support traditional tanks and infantry vehicles in combat and thereby reduce the risk of mortality for soldiers in the field of battle.

By taking on the most dangerous tasks and positions, says Milrem Robotics, the Type-X acts as an "intelligent wingman" taking the risk of humans, explains Milrem Robotics. Asimov, the three laws are increasingly at risk.

The Type-X will provide equal or greater firepower and tactical usage to a unit equipped with infantry combat vehicles. Provides means to breach enemy defensive positions with minimal risk to your troops. Replacing a lost RCV is purely a logistical nuance.

The Type-X weighs less than 12 tons and has a low height of 2,2 meters. The robotic tank has a rear motor, which means it provides a low visual and thermal footprint.

"The vehicle will be equipped with intelligent functions such as follow-me, waypoint navigation and obstacle detection with artificial intelligence that is part of the algorithms," he explains Väärsi. "Additionally, Milrem Robotics' software developers have taken a totally new approach to enabling remote controlled operations at higher speeds.

It injects itself directly into the bones and repairs, or strengthens, them much more and much faster. It's a new ...