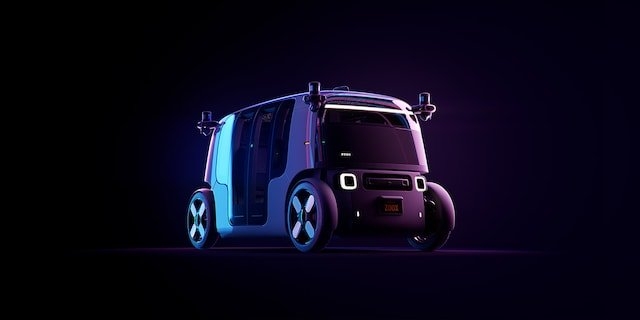 Zoox, the robotaxi company acquired by Amazon for more than $ 1 billion earlier this year, revealed its electric, fully autonomous carpooling vehicle, along with its vision for the future of urban mobility, on Monday morning.

Passengers will use an app to book the vehicle, just like they do today with Uber and Lyft, but without a human driver. “We are transforming the passenger experience to provide mobility as a superior service for cities,” he says Aicha Evans, CEO of Zoox. "And because we see alarming statistics on emissions and road accidents, it is more important than ever to build a sustainable and safe solution that allows you to get from one point to another in a city." A fleet of robotaxis?

The vehicle is symmetrical and bidirectional. It works the same in both directions, with an automated steering system designed to maneuver in and out of tight spots, minimizing turns and U-turns. Accommodates up to four people, with sliding doors on either side .

Primarily intended for short trips in urban environments, it is however also capable of driving on roads at speeds of up to 120 kilometers per hour (75 miles per hour).

Zoox claims the L5 vehicle has more than 100 safety innovations, including a new airbag system and Euro NCAP five-star equivalent protections for each seat. Sensor arrays are located in every corner of the vehicle, creating a 270-degree field of view that eliminates blind spots.

Ok, Zoox is for people: but Amazon is involved. Will he also deliver the packages?

Features inside the Zoox robotaxi include wireless phone charging pads and an open-air roof. Zoox L5 It was designed from the ground up as a passenger vehicle. This has given it advantages over other companies that have adapted existing vehicles to autonomous driving technology.

However, Evans acknowledged the possibility of working with Amazon on package delivery in the future. “First we will move people. Here's where the question lies. This is the greatest benefit for society, cities and all people involved, ie also for customers, "he said in an interview with Bloomberg TV. "But yes, I admit that if we manage to move people, especially with this footprint, at some point we could also move packages".

The company says commercial robotaxi operations "will start soon" in San Francisco and Las Vegas, but did not provide a timeline. Evans said the commercial launch won't be next year, but it won't take as long as some speculate in the press and industry circles. The price was not announced.

The race has started. Alone.

Zoox is competing against other tech giants and startups in the race to develop autonomous vehicles. But Amazon's acquisition of Zoox provided the Californian company with financial backing to continue pursuing its robotaxis vision, even as others struggled to bring similar technology to market.

La last week Uber has delivered its self-driving technology independent  to the vehicle company a guide autonomous Aurora to make it develop ..

If you want more information, find here a brochure of Zoox L5.

EVA, indoor aquaponics that furnishes with a natural symbiosis

Since the advent of touch screens, it has been a flourishing of mobile devices and tablets: our way of ...