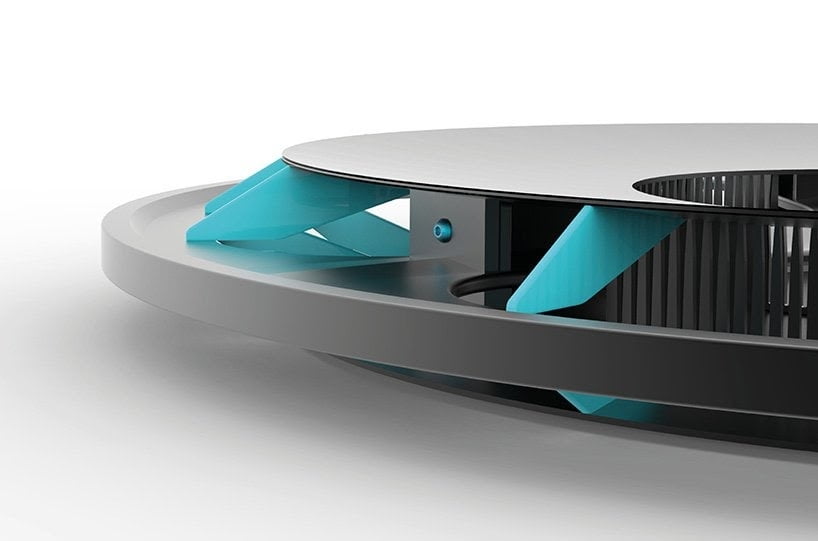 Kristen Tapping, a designer at London South Bank University has designed Rolloe, a bicycle wheel that uses motion to purify the air of harmful particulates and gases in major polluted streets.

Rolloe requires no additional energy to operate as it uses the kinetic energy of moving vehicles. Compared to other outdoor air purification devices, it captures polluted air directly at the source, allowing for greater efficiency and impact.

The device consists of three parts: a tri-wheel and two circles that hold together circular washable air filters. The rims have large central cavities and are lined with lugs. As the wheel turns, the lugs create a pressure difference by drawing air from the internal cavities and then pushing it out through the outside.

When the wheel is in motion, it sucks everything in from the central part and pushes everything out from the edges, after passing it through various external filters to purify the air. A prefilter, a HEPA filter (for particulate matter up to 2,5 microns) and an activated carbon filter (for gases). The air is then expelled into the environment with fewer particulates and lower levels of harmful gases.

Upcoming developments of the bike wheel that can purify the air

The next steps aim to maximize the air intake efficiency. If it works, the bike device to purify the air could be offered to ride sharing companies.

It has something poetic, don't you think? Katie Melua's song "9 million bicycles" comes to mind. I listened to it on my headphones at 6 am on June 2012 in Beijing, while I watched many Chinese people go by bike to go to work (already wearing a mask, but because of the smog).

Nice to think there could be around 9 million air purifiers, in Beijing as elsewhere. The holding company, Ingka, has revealed that by December 2019 IKEA will generate even more energy from renewable sources, further strengthening during ...