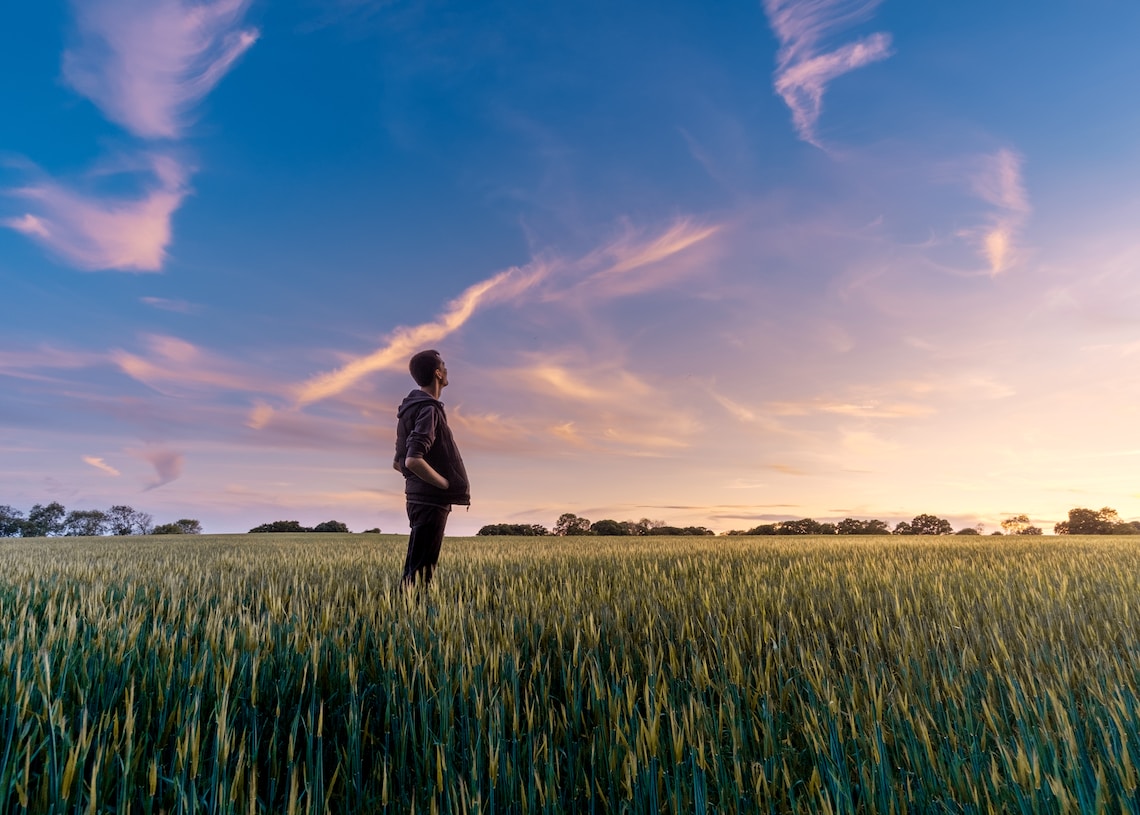 Photo by Benjamin Davies on Unsplash

how will the future be? We often imagine it as something that will have to come. It is actually something we have to build. Here are 14 signs of tomorrow that started today.

Most of us have vague ideas about the future, as if it were a distant reality. In general it makes us feel good (especially recently) to consider the present as a nightmare from which we will wake up soon. But I have bad news for you: this is not a nightmare.

What will the real future be like? It won't be an apocalypse. It won't even be full of spaceships and robots. And it will seem a bit dystopian to us, yes, but not as we think. If we are to have any chance as a species, the future must be greener, more agricultural and even more rural than we are living in now.

Somehow, to move forward we will also have to travel a little bit back in time.

Here are some general points about what the future is likely to be like. The ray is that of the next ten or fifteen years.

We will probably reconnect with family and old friends

Recent generations have increasingly moved from home to pursue careers in big cities. We have embraced metropolitan and cosmopolitan lifestyles, perhaps looking a little down on the people who have remained close to their birthplace. Perhaps we have judged them to be unambitious and provincial.

There is something in the world that will make us change our minds now.

If you wonder what the future will be like, I can tell you for sure that it won't be a world of independent loners. And this for a fact that is consolidating. Not social, but monetary: the economy will not experience a V-shaped recovery.

Living without a support structure is already pushing millions of families past their breaking point. They returned to live younger with their parents than after the Great Depression. Far fewer people will flee to some metropolis to pursue their dreams.

Couples in their 30s and 40s will also begin to get closer to their relatives. They will be able to pool resources and save money on things like childcare and elderly care.

Climate change is coming sooner than expected. People keep talking about it as if it were a looming challenge, yes, but one that will be more up to their children. No. It will be up to us already. It's already here.

Climatologists have been warning us for decades. And now it must be said clearly: it is too late to reverse.

We will live with the consequences of pollution and greenhouse gas emissions for the next few decades. If we are smart, we can start making radical changes right away to mitigate relapses. This would be the best scenario.

There is already a mini exodus underway from major coastal cities, one above all New York. Places hit hard by natural disasters (as well as a pandemic). The smoke from fires in many places around the world, from California to Greece via Australia, the Amazon and even Greenland is literally suffocating people.

The economy will likely go into a crazy shock

This seems to me an all too easy prediction. I am not an economist, but I can read. The governments of the world will not be able to support private industries in crisis such as airlines or those in the tourism sector for long. They can't afford to do that.

Airlines already have plans to lay off thousands of workers when their financial support runs out. And if one sector implodes, the shock wave affects other sectors as well. Many others.

It will be years before we begin to understand all the implications. At that point, we won't be able to deny the truth. We are at the beginning of a very deep economic depression.

It will transform the way we live for the next 100 years. It might not be a terrible thing, at least for the planet.

Public health is likely going to have a bad time

The health sector will experience a strong transformative crisis, which will put the models of public, universal and free assistance in difficulty.

With universal health care in crisis, hospitals and medical practices may begin to fall apart.

With two-speed healthcare (free to collapse and private still functioning) the terminally ill would simply forgo treatment rather than leave their families full of debt.

Fewer people in general would seek medical attention, save for emergencies. And even then they may try less effective DIY options, despite the dangers.

I hope it doesn't happen.

We will probably buy smaller houses

Many of us grew up with the idea that one day we would own a villa, perhaps on an island. Let's break free from this toxic dream: the thirst for giant outfits is part of what put us in this mess.

Large houses are very expensive and produce a lot of waste. The smaller ones they are cheaper in every way. They are also easier to sell.

In ten years, the last place a person will want to live is a giant house with utilities, property and "operating" taxes, such as waste, that they cannot afford.

We will probably drive an electric car

Most countries have pledged to completely phase out fossil fuel cars by 2030.

Not fast enough to save the planet: we have to start driving less now. The pandemic has made it easier. The next time you buy a car, if you can (in Italy you can thanks to the incentives) buy an electric one. I've always been skeptical about the emissions of the hybrid ones, and now my suspicions are confirmed.

The car we drive will probably not be ours, or not ours alone

Many people (more than you think) still drive big SUVs that they don't need. It is an expensive testosterone booster that kills the planet.

If governments are to seriously address climate change, they will need to incentivize smarter cars and infrastructure. They should also consider stricter vehicle regulations. I see it hard.

Solar energy becomes cheaper and more popular every year. In the medium term, this will save money on energy, and will ward off spikes. It will also help overcome the increases that most of us will see, due to climate change that will make it more expensive to maintain networks.

Power companies will struggle to keep up with time outages. Energy storage systems will experience a good increase, because they will allow appliances to be used even if the network is inactive.

We will probably look for the nearest vegetable garden, or we will grow something ourselves

Il climate change it will certainly have an impact on agriculture. We are already starting to see it this year. Over the next ten years, we may find it a little more difficult or expensive to purchase products like avocado, coffee or chocolate.

Some people are already getting a little cautious about completely relying on grocery chains for their food. They try to become more self-reliant.

It's what they call homesteading abroad. We could explore this and make it part of what our home's future will look like. Ok: closer to friends and family and with a vegetable garden close at hand. It is a small community.

We will probably start trading something

The economy will undergo gigantic changes, and people will become creative about how to meet their needs. I observe with curiosity the birth and the spread (for now only overseas) of the project "Buy Nothing”And local groups almost everywhere. They are groups and hubs in which people directly exchange goods and services. A phenomenon that will continue and grow as homesteading becomes popular.

Money will not lose its value anytime soon, but we will probably return to saving it for things we cannot get from our local community through trading with things we have, or with services we can offer.

Amazon and its friends probably won't like it: for this they will find a way to profit from it. Or they will try to stop it, keeping it at bay.

The average public school system is in bad shape. The pandemic has highlighted problems that we have been aware of for decades.

We are witnessing a global shortage of teachers, there is not just an Italian question. Home education is not, will not be for the faint of heart: due to Covid, however, distance learning is microschooling are an option considered. And this will have consequences.

We will probably prefer to work from home as well

It's not always pleasant for most of us. It has drawbacks that we are all well aware of by now. Today, however, given the situation, it is safer. And deep down (unfortunately) we know that this probably won't be the last crisis that sends us into our homes for long periods. Somehow the world is preparing for structural change, and this will also involve it smartworking to some extent.

Those of us who have remained busy have found new degrees of flexibility and autonomy. Even parents like me, who have been stuck with a small child for months 24 hours a day for months, won't automatically give up on some of the positives of it all.

We will probably become more self-sufficient

Again, it's not a complicated prediction to make about what the future will look like.

All of these trends stem from articles, research and books read over the past two or three years. They point to the same basic idea. We will move away from a consumer economy. Here's what the real future will look like.

I don't know if very little, little or a lot, but there will be a distance between us and the consumer economy that lived up to two years ago. A great many will not like this: they may even hate it at first. And it will be hard for everyone.

But we won't have a choice. We will have to adapt. Our survival depends on it.