A church in the Colosseum. More: an entire temple surmounted by a dome that would have exceeded it in height. Fortunately, the eighteenth-century project failed. Here because.

For the series "the future that did not happen": perhaps not everyone knows that over the centuries there are many projects that have tried to build inside the Colosseum, the largest amphitheater in the world originally known as the Flavian Amphitheater (we call it Colosseum " solo "from the Middle Ages).

Among many, I was struck by this church in the Colosseum. Already in the sixteenth century a chapel, known as Santa Maria della Pietà, had been erected inside the Flavian amphitheater.

In this beautiful report by RAI Scuola in 2017 an exhaustive summary:

The chapel, moreover, since the second half of the 30s has been entrusted to the Circolo San Pietro, which also celebrates Holy Mass there (Saturdays at 16,00 pm and Sundays at 10,30 am).

In the eighteenth century, however, the architect, sculptor and engineer Carlo Fontana took a step forward. They proposed an even more ambitious project. Something more than just a church in the Colosseum. Fontana proposed to raise a sacred temple where before there was one of the pagan type.

A sacred temple instead of a pagan temple

And what could Fontana think about a place that over the years has seen massacres of all kinds against slaves and political or religious persecuted?

A temple dedicated to Christian martyrs, killed by the hundreds, perhaps thousands in the many "playful" events in the Colosseum.

Tradition says that the bishop and Father of the Church St. Ignatius of Antioch also died here. "He was fed to the beasts," they say.

The monumental sacred complex would have been surmounted by a large dome and the statue of a Pope. All this would have gone well beyond the walls of the Colosseum, exceeding them in height and towering throughout Rome.

Fortunately, thanks to the Spanish Civil War, the Turkish invasions and the political and economic difficulties, the project was blocked.

It is good that the future "overwrites" the past. It is even more beautiful, however, if you manage to preserve the past for future memory. 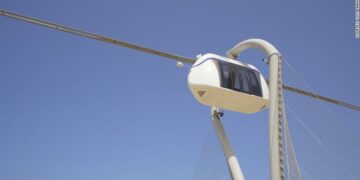 Artificial intelligence to avoid collisions and make passengers and goods coexist: the trolleybus of the future promises a lot, and heats the ...