It is always difficult to improve yourself by running alone. Ghost Pacer allows you to race against virtual opponents, or against your own old performance

Anyone who loves running knows that keeping up and improving performance is easier when there is a partner. You can compete, you can overcome. From today a new augmented reality system, Ghost Pacer AR, allows you to do it against a virtual avatar that only we can see.

Ghost Pacer AR is an augmented reality (AR) viewer, which means that it overlays virtual images on the real world. It is a fascinating technology already used for video games like Pokémon or Minecraft, or for applications like IKEA that allow you to see in advance what a piece of furniture looks like in your home.

In the case of Ghost Pacer, technology is put to work to improve workouts. When looking through the viewer, Ghost Pacer projects an avatar onto the path. This virtual training partner can be set up to run at a certain pace or even replicate a past running session, ours or a friend's. A way to literally surpass yourself, and watch yourself do it.

It is not the equivalent of a carrot placed on a stick. The avatar does not just stay in front: you can overcome it, even sow it if you run a lot.

It's all controlled via the Ghost Pacer app, which allows users to set the avatar's path and speed, and record their performance like other workout trackers. It also syncs with Strava, a social media network for runners and cyclists, which allows you to convert other people's runs into routes for the avatar to follow.

From the point of view of dimensions and functions, it is not certain a HoloLens, but it doesn't have to be. The main concern is that it's light and nimble enough to wear while running, so the Ghost Pacer looks like a slightly bulkier-than-usual pair of sunglasses, weighing just 90g (3,2oz). The display has a resolution of 1.280 x 720 and a field of view of 30 degrees. The battery apparently lasts up to 6 hours and takes 1 hour to charge via USB-C.

There is also a Pro version of Ghost Pacer, which can connect to some smartwatch models to collect more detailed data.

Ghost Pacer It's definitely an interesting use of AR technology, but obviously without trying it myself I can't be sure how well it works at this early stage (no, it's not an invitation to have a copy sent to me to test. Not when I'm on vacation: D) .

Ghost Pacer is currently seeking funding on Kickstarter, where it has already raised over $ 82.000, surpassing its $ 25.000 goal. Super early bird promises start at $ 199 for the regular model and $ 219 for the Pro version. If all goes to plan, shipments are expected to begin in July 2021.

See it in action in the video here: 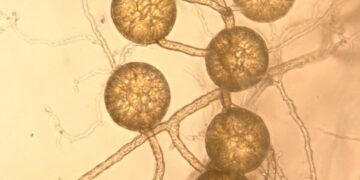 Researchers have discovered a group of soil bacteria that could produce alternatives to fertilizer to feed the soil ...