For the first time in the world, a study investigates the electrical signals transmitted by plants. A mode of communication that is not yet clear, but interesting

A research team has explored the workings of the electrical signals that plants appear to emit underground. With a combination of physical experiments and mathematical models, the analysis showed interesting results. Although, on balance, it is still unclear exactly what messages the plants might want to exchange.

The work is based on previous experiments conducted by the same team. Those too were about how this… er… how to call it… underground messaging service. The researchers used electrical stimulation to test how plants transmit electrical signals, even when they are not in the same soil.

“We can use the mathematical model to simulate and study these processes on a computer. It avoids long and expensive experiments ", says electrical engineer Yuri Shtessel  of the University of Alabama.

Together with the biochemist Alexander Volkov of Oakwood University, Shtessel tested communications between different types of plants in separate pots. Both with and without air gap. Without an electrical conductor connecting the plants, the connection is broken. By inserting a silver wire, the network is up and running again, suggesting that any type of electrical conductor can be used for these plant-to-plant “chats”.

The messages take a similar form, even between different types of plants: aloe vera and cabbage plants were used in the new research, while previously a "match" between tomato plants was examined. Models suggest that different implant types may be able to communicate in the same way.

“I think it is entirely possible that the signals could propagate through the root network. Spread in the ground, or in the common space even between different plants ", says Shtessel . "The soil has the role of conductor."

While this new study doesn't come to firm conclusions about what is said between plants or how much of the communication is intentional or not, it does show the potential for sending messages about their growth or movement.

It also shows that networks mycorrhizal previously identified in other studies they are not necessarily necessary to establish a plant-level communication network. This raises some interesting questions for future studies. It is only the latest among the discoveries of a large list of plants. From how respond to touch to how we might possibly be able to communicate with them.

It is the first time in the world that a study investigates the cognitive processing of electrical signals passed and received by plants. Another problem will be studying the communications of plants with electric waves through the air.

It is a different story that has not yet been studied thoroughly, but reminds me of a certain film by an Indian director.

The research was published on Communicative & Integrative Biology 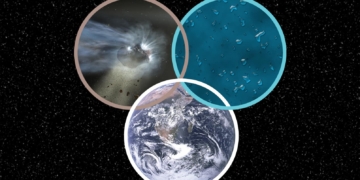 Water on earth and other celestial bodies? It comes (also) from the sun in 'isotopic' form. The thesis can help exploration ...

Romotow arrives, the camper that looks like a Swiss army knife