[In] Brace is an interface for controlling devices with the tongue. It has a thousand applications, even in the area of ​​disability. And maybe in the future the mouse will evolve into a piercing. 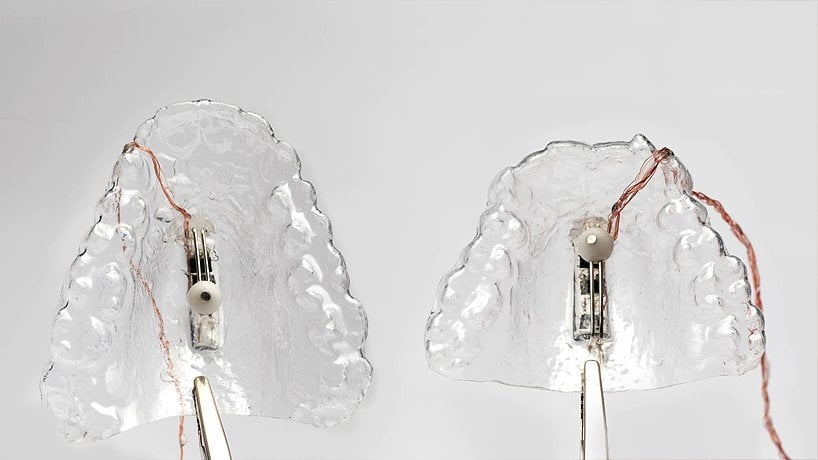 [in] Embers, check the computer with your tongue

As part of her Master's thesis in integrated design, Dorothee Clasen has created an intraoral wearable device that enables a language-based interaction between man and machine.

When [in] Brace is placed inside the mouth, users can move a small magnetic element back and forth to control devices with their tongue and generate input. The wifi module behind the user's ear then transfers the given input to other connected devices, such as IoT devices, computers or game consoles.

At the beginning of the project, Dorothee Clasen has studied the panorama of tactile interfaces and the way in which humans interact through contact with objects. Many interfaces use the hands or fingertips, but she has decided to focus on another part of the body: the mouth. Driven by curiosity and a desire to find new principles for a language-based interface, Clasen built many different prototypes to physically explore her ideas, working with different materials, actuators and sensors.

[in] Brace, controlling devices with the tongue

The final prototype is based on an electromagnetic principle to ensure a tangible, fluid and reliable interaction. built-in sensors detect the position of the small magnetic sphere that the user's tongue can push back and forth. To achieve fluent and direct manipulation, the position and distance between the sensors must be adapted to the specific needs of the user's language. the device was therefore designed with a sort of "machine" to be placed in the palate area.

The mouse of the future? A piercing

To experiment and test the final prototype of [in] Brace, the Clasen created the 'Tong' game. it is evident that it is based on one of the most iconic arcade games in history. Practically Pong, but with the tongue.

To play "Tong" two devices have been made, just like a console joystick. Their design has been adapted to the physiological attributes of the user, for a better position of the sensors on the palate. Using the tongue required the user to develop a particular eye-tongue coordination. The first few games were a bit erratic, but users quickly improved their skills and enjoyed the game.

In the future it will be possible to further miniaturize the plant. Biological and non-invasive forms of connection will replace the wires. Maybe one day it will be possible to position the sensors directly in a normal metal sphere, a sort of piercing like those that today are shown on the tongues (and not only) of many people.

Thinking about possible applications and finding suitable user scenarios was another important part of this work. Reduce the size of the device. Implementing the wifi module and battery was also not easy. Next steps? Incorporate an actuator to allow tactile feedback from the device. And of course collaborate with other disciplines to test the device on a more targeted target group.

[In] Brace could be used in physiotherapy to motivate patients to retrain the movement of the tongue, perhaps even through gamification. An interface for controlling devices with the tongue could also be used when other parts of the body (eyes, hands, feet) are already occupied with performance tasks. An astronaut might use a tongue device during an extraterrestrial mission to give subtle input, as bulky suits and gloves aren't designed for delicate interaction tasks. A pianist could flip through electronic scores with their tongue as they play. A skier or motorcyclist could switch between tracks on their playlist while running or skiing.

In reality, the applications could be many, even in the area of ​​inclusion and disability.

What if [In] Brace became a standard? Users with lack of motor skills in their hands or fingers could command the devices with their tongue. They would interact more easily with them and with digital environments. Judging by the latest developments I would say that the goal is near: we have it, it must be said, on the tip of our tongue.

A ferroelectric battery improves with use

The 96-year-old inventor of lithium batteries challenges thermodynamics by announcing the development of a glass battery that increases ...