Deforestation and resource consumption continue too quickly. A recent study predicts that the collapse of civilization is now a few decades old.

In recent times there has been no shortage, I must say, the fatal news. Since January 1, 2020 someone has opened the Pandora's box and among pandemics, natural disasters and man-made failures there was only spoiled for choice. This analysis developed by a team of theoretical physicists seems to raise the bar further, however.

In an article written by dr. Gerardo Aquino, associate researcher at the Alan Turing Institute in London, there is a sort of "road map" of the disaster. A path that clearly shows the strong probability of the collapse of our civilization in a short time, linked to the consumption of resources, overpopulation and deforestation. The study has been published in Nature Scientific Reports.

This trajectory greatly restricts the times of the most pessimistic forecasts made in the past. According to Aquino, who is involved in studying the models of complex political, economic and cultural systems for predicting conflicts, the collapse of human civilization will happen much earlier than we think. The cause? The increasing impact of deforestation on planetary life support systems necessary for human survival. A phenomenon that affects many very important and linked factors, including carbon storage, oxygen production, soil conservation, regulation of the water cycle, support for nature and human food systems and human habitats and other countless species. Overpopulation worsens the big picture.

The collapse of civilization

In the absence or with a sharp reduction of these crucial elements, primarily the forests (which at the current consumption rate would disappear in 100-200 years), "it is highly unlikely to imagine the survival of many species, including ours, on Earth". The study also specifies more. "The progressive degradation of the environment due to deforestation would heavily affect human society and consequently human collapse would begin much earlier." Another academic, Professor, contributed to the paper Mauro Bologna of the Department of Electronic Engineering of the University of Tarapaca in Chile.

In summary: the calculations show that by maintaining the current population growth rate and resource consumption, in particular the consumption of forests, we have a few decades left before an irreversible collapse of our civilization.

Collapse of civilization: how long are we left?

The conclusion of the document tries to focus on the timing. “Our model shows that a catastrophic collapse in the human population, due to resource consumption, it is the most probable scenario of dynamic evolution based on current parameters. From a statistical point of view, the probability that our civilization survives in itself is less than 10%. In the most optimistic scenario."

Maintaining the effective rate of overpopulation and resource consumption, in particular the consumption of forests, we have a few decades (from two to four) before an irreversible collapse of our civilization. 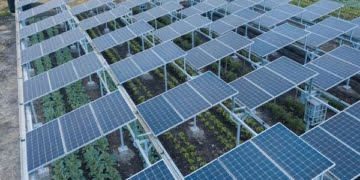 The agrivoltaic solar panels capture the energy of the sun's rays and, at the same time, protect the crops and the land below