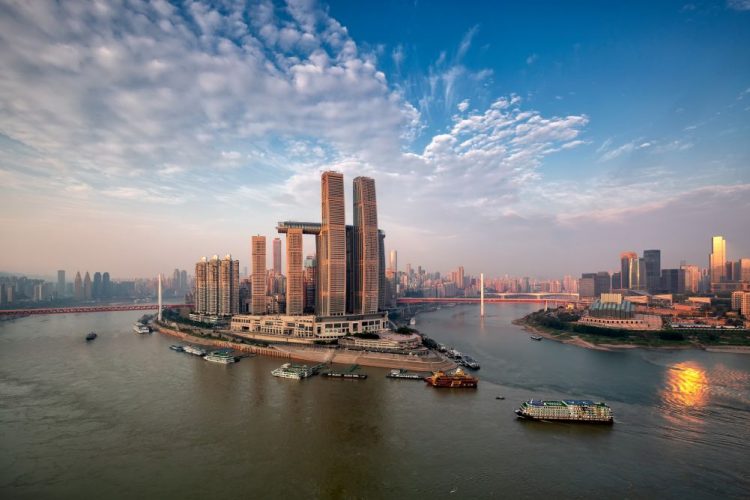 It is one of the incredible skyscrapers of the future that I have dealt with in this post. The entire Raffles City complex, as mentioned, will be completed shortly, but its most notable feature, the horizontal skyscraper, has already opened to visitors.

It is a real "bridge" that crosses longitudinally the skyscrapers of the complex. Incorporates a park and an observation point from the glass floor.

Raffles City Chongqing, a cyclopean € 4,5 billion facility, was designed by Moshe Safdie and consists of a group of eight skyscrapers. Four of the towers house the horizontal structure of the skyscraper, which is officially called Cristallo, at a height of 250 meters. The crystal itself measures 300 meters in length. A real horizontal skyscraper, therefore, with a remarkable weight of 12.000 tons.

Much of the Raffles City "crystal" structure had to be meticulously mounted in position using cranes and high engineering skills.

Visitors to the Crystal's Exploration Deck, as the observation area is called, begin their journey on the ground floor with an exhibition created in collaboration with National Geographic that illustrates the history and development of Chongqing.

Un express lift it takes just over 50 seconds to reach the top. Once the doors are open, visitors are greeted with another exhibition, which in this case tells the future, simulating a future life on Mars.

Afterwards, visitors will pass through a small green park, before the tour highlights with the "highlight": the outdoor exploration deck.

Walking in the sky

This viewpoint has a transparent glass floor and offers excellent views of the city and the convergence of the two neighboring rivers. To complete the facilities, a club house with two swimming pools, restaurants and bars, but these are still being completed and should open in the coming months.

Raffles City is both future and past: a futuristic building, equipped with all the latest technologies. And at the same time a skyscraper that sees the light in the post Covid world.

A world that perhaps needs buildings, even different cities.