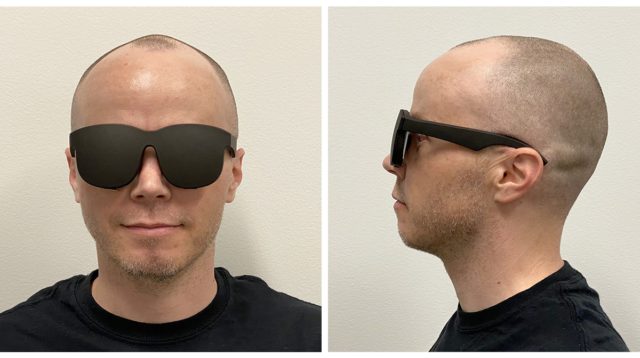 A team from Facebook Reality Labs uses holographic film to create VR visors as big as sunglasses. Revolution in sight in virtual reality.

However very fast, advances in virtual reality technology in recent years still stop in front of a small wall. This is the size of the devices: the viewers are still bulky, and represent a deterrent. Even the most compact VR headsets today seem to be somewhere between a motorcycle helmet and big ski goggles. They require strong rubber bands to be secured to the head and come on, they are ugly strong.

Today the researchers of Facebook Reality Labs they are using holographic film to create a prototype VR headset that looks less like steampunk stuff and more like lightweight sunglasses. With a total thickness of less than 9mm and with no significant reduction in field of view or resolution, these screens may one day make today's VR headsets completely obsolete.

In the recent paper Holographic Optics for Thin and Lightweight Virtual Reality, researchers Andrew Maimone e Junren Wang detail the optics behind their lightweight prototype. The key to "miniaturization" is a series of flat, polarized films that use a light bending technique to reflect the image displayed multiple times in a small space.

Such a design effectively extends the apparent focal length of the image (which is key to the comfort of the user's eye) without the need for a large physical space for light to pass through. Holographic films used to focus the image on the eye also eliminate the need for the bulky refractive lens systems found in current headphones.

What is the yield?

Despite its slim dimensions, the display prototype is able to provide a field of view of about 90 ° in tests. It's a big improvement over thin-film AR displays like Microsoft Hololens or Magic Leap, and it's comparable to VR headsets like Oculus Rift and Quest. Since Facebook's display prototype uses lasers instead of LCDs to create an image, it is difficult to do a pixel-based resolution measurement. The display resolution varies as you move away from the focal center, with significant noise over 60 degrees.

The images in the center of the prototype display approach the limits of 20/20 human vision in detail.

After the enormous potential, here are the limitations to the current holographic display prototypes. For one, the current model only displays content in multiple shades of green. Getting color images in this form factor will also require red and blue laser integration and overlap. Nothing prohibitive, but careful design and engineering work will be required. On the plus side, however, once fully operational these lasers should theoretically be able to deliver a much wider color gamut than the usual sRGB LCD displays found in current VR headsets.

Finally, the prospect of a product intended for mass consumption. The current prototypes focus on the most important thing, it is true, that is, the vision. But we know well that a finished product should include, and this is matter for the future, a pair of display modules, an IT platform, batteries, trackers and all the components. In a frame similar to the sun.

It takes some time, but this is the way.

Even considering the limits (which take time and make it a question of "when", not "if") this prototype sounds like a revolutionary new direction and entirely feasible for future VR headsets. A revolution that could free virtual reality from the significant limitations of its current uncomfortable form factor.

Towards a time when you just need to put on a pair of glasses to find yourself in a different world.