A smartphone app is able to accurately evaluate hemoglobin, and without any contact.

A team of scientists and researchers has created an app that can accurately assess the level of hemoglobin in the blood from a smartphone image of the eyelid.

The authors of the development believe that the hemoglobin monitoring app is particularly useful. Between us, I think so too. For example, to diagnose ailments such as anemia in poor countries, or in those with hospitals lacking the necessary equipment for testing.

An international team of researchers has developed the method, which does not involve any contact, to evaluate hemoglobin levels in the blood. The report was published on Physis.org.

How to measure hemoglobin with a smartphone

Just download a specific app and take a photo of the eyelid. The program converts the photograph and sends it to a computer, where the hemoglobin concentration will be estimated by spectrum analysis.

To train and test the algorithm, the authors used data from 153 Kenyan volunteers who took a routine blood test. 138 of these volunteers contributed to form the program and 15 to verify its effectiveness.

It turned out that the new method has no inferior capabilities to traditional approaches for assessing hemoglobin levels.

The authors of the report and the app note that the system can significantly facilitate the diagnosis of anemia, itself a symptom of many diseases.

The announced technology is a particularly suitable technology, as I said, for developing countries. Places where hospitals often don't have the equipment they need. And given the global context, I would also not neglect the logistical aspect: the app will allow you to assess the level of hemoglobin in the blood remotely, without having to visit doctors.

Let's see, as they say: on the other hand, diagnostics can be very useful both big data and artificial intelligence (the two elements often influence each other). 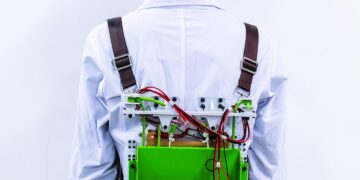 A backpack that makes its load lighter for those who carry it, and also recharges devices? ...