An area of ​​depression of the Earth's magnetic field known as the "South Atlantic anomaly" becomes larger and larger, and could indicate a reversal of the magnetic poles.

Earth's magnetic field is weakening between Africa and South America, causing problems for satellites and spacecraft.

"A new minimum value of the South Atlantic Anomaly has appeared in the last decade and in recent years it is developing vigorously", said Jürgen Matzka, of the German Research Center for Geosciences.

“We are very fortunate to have the Swarm satellites in orbit to investigate the magnetic axis and the development of the South Atlantic Anomaly. The challenge now is to understand the processes at the core of the Terra that drive these changes ".

One possibility, according to ESA, is that the weakening field it is a sign that the earth's magnetic field is about to reverse, whereby the north and south poles reposition themselves. The reversal of the Earth's magnetic field, however, would be much faster than expected.

The last time there was a "geomagnetic reversal", a reversal of the Earth's poles, was 780.000 years ago. Several studies conclude that the next such event is long overdue. Typically, such magnetic reversal events take place every 250.000 years.

The repercussions of such an event could be significant, because the Earth's magnetic field plays an important role in protecting the planet from solar winds and harmful cosmic radiation.

Telecommunication and satellite systems also rely on the magnetic field for their operation. Computers and cell phones may also have difficulties.

It is not the only hypothesis

A 2018 study published in the scientific journal Proceedings of the National Academy of Sciences has come to a different conclusion. Despite the weakened magnetic field, the study says, "the Earth's magnetic field is probably not reversing."

The study also explained that the process is not instantaneous and could take tens of thousands of years.

ESA said it will continue to monitor the weakening of the magnetic field with its constellation of Swarm satellites.

The mystery of the South Atlantic Anomaly has not yet been solved.

One thing is certain, though: observations from the Swarm satellites are providing interesting new insights into the hardly understood processes occurring at the center of the Earth. 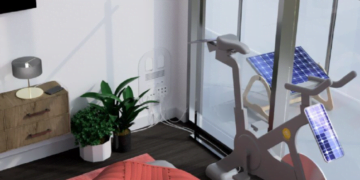 A system that combines wind, solar and… kinetic to store renewable energy. A dove's egg that can revolutionize construction.