The post covid will change its face to restaurants: a fast food giant like McDonald's cannot be an exception. Here are the solutions adopted in the prototype restaurant in the Netherlands. 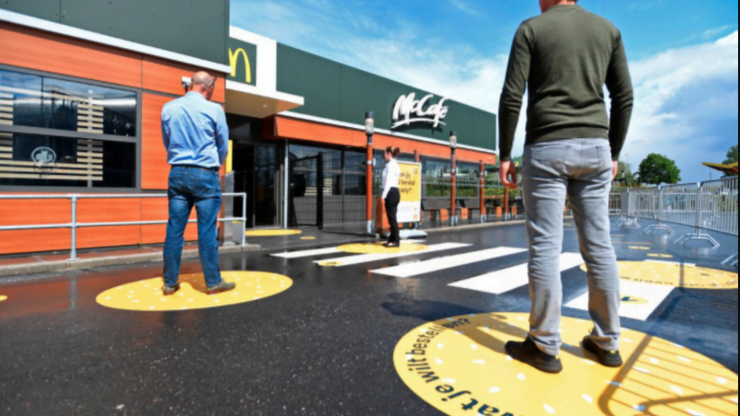 In Arnhem, the Netherlands, McDonald's has opened a prototype of an equipped restaurant taking into account the social distancing measures due to covid. The latest news says that it is unique among McDonald's in the world. It is used to test new security measures for guests and employees of other McDonald's around the world. Solutions that will limit the spread of the virus once the blocks are released, reports Reuters, and that perhaps they will avoid the closure of as many stores in the McDonald's chain are in densely crowded places.

We have tried to understand how to protect our customers and employees, while maintaining a restaurant atmosphere

Koekkoek added that these are drastic changes for Mc Donalds, but they hope to implement them so that customers don't notice too much when eating at McDonalds. For example, no changes whatsoever in timetables, offers and promotions are expected for the McDrive type.

How many McDonalds are there in the world

From the mcdonalds ads we read that in unsuspected times (end of 2018) the chain consisted of over 36.000 stores to eat mcdonalds in 119 countries around the world. Among these, of course, most of McDonalds in the vicinity of large cities, or chain links. In Italy, for example, mcdonald arese and mcdonald napoli station are the ones that over the years have collected the most passing visitors.

And how many McDonalds are there in Italy instead? The American giant also has a massive presence in our country. 610 restaurants, 385 McDrive, 470 McCafè and 140 licensees. Iconic places manned, such as mcdonald venezia centro, or mcdonald milano station. There is practically a McDonald's in the vicinity of every frequented place in the boot: this type of configuration will hardly be applicable in all. But it is certain that the McDonald's regulation will change for all of them, providing for more adequate sanitary measures and distances.

What will a fast food restaurant look like after Covid-19? What will McDonald's be like in the world?

The prototype restaurant layout in the McDonald's franchise still resembles a restaurant in the pre covid world, but there are notable differences. Among the McDonald's novelties of this type of place, solutions that make it something halfway between a McDonald's restaurant and a burger king after all the customers have run away. There will be, after all, throughout the food sector. Starting from the social withdrawal lines before entering. Once inside, each guest is required to spend 20 seconds in the center of a hand washing station to maximize cleanliness. Inside, any McDonald's item will also receive new and agile sanitation processes.

In the restaurant prototype, all cashiers have been removed and all guests order from interactive kiosks. Once the order is complete, guests will choose a seat by reaching one-way seating. An employee will deliver the order on a trolley, almost like a traditional restaurant. What are we doing? Are we starting to tip?

The company expects the restaurant prototype could soon be launched across the country in 180 of its 252 franchises.

Not before June, though. This will give the fast-food chain enough time to adapt the layout of restaurants to social distances.

Why did you start from Holland?

If McDonald's had started planning to renovate the layout of its restaurants in the US a month ago, there would have been riots, but now that conditions have changed, the Americans could be next. Who knows McDonald's Italy. Can you imagine the Mcdonald's nearby with these tricks? Or that of a crowded Italian center (Milan? Venice? Naples? Arese?) Will we end up absently putting the Amuchina in the sandwich, between the salad and the hamburger, instead of the McDonald's bbq sauce?

Who knows if McDonalds barbecue sauce will change its flavor. Life however is taking a decidedly more bittersweet one.

In difficult times like these, popular issues persist: in the last 3 and a half years the only positive developments for ...