Time is running out for the ecosystem of the oceans: the study just published in Nature only gives us 10 years to avoid their collapse.

The global ecosystem is in far greater danger than scientists previously thought, according to a new study just published. And it's a study that doesn't mince words.

The research estimates that without radical action to reverse global climate change, large numbers of ocean ecosystems, not excluding the entire ocean ecosystem, could suddenly collapse as early as this decade.

And it contains a terrible prediction. Since various organisms are already facing higher temperatures than anything they have ever endured before, the world will witness sudden massive deaths.

I study, published in the prestigious journal Nature, examines what temperatures can be endured by 30.000 terrestrial and marine organisms. Then he crosses them with the temperature increases expected over the years up to 2100.

When the species reach their temperature thresholds, they can actually vanish. And in the ecosystem of the oceans, this disaster could occur simultaneously for many of these species, in what researchers call "sudden exposure events."

It is not a slippery slope, but a series of cliff edges, which affect different places at different times

The crisis of our oceans no longer seems avoidable. If governments take partial or palliative measures, the study still predicts a similar terrestrial decline. Instead of the 20s, certainly the 30s of this century.

"The world is currently and rightly focused on fighting the global health emergency"he said Mark Wright, the scientific director of the British section of the WWF, World Wildlife Fund. "However, this new research reinforces the fact that, after going through this extremely difficult time, we will need renewed ambitious actions to address the climate and nature crisis."

Already. Because "restarting", in a world like this, means starting again first of all environment and clean energy. Now or never, time has almost expired. 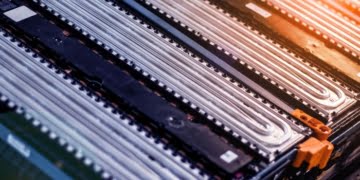 Copper nanowires allow a new battery to better organize the particles within it, improving (greatly) ...