Service roads closed to cars, new networks of cycle paths and focus on pedestrians: so cities prepare for the future after (or during) the coronavirus. 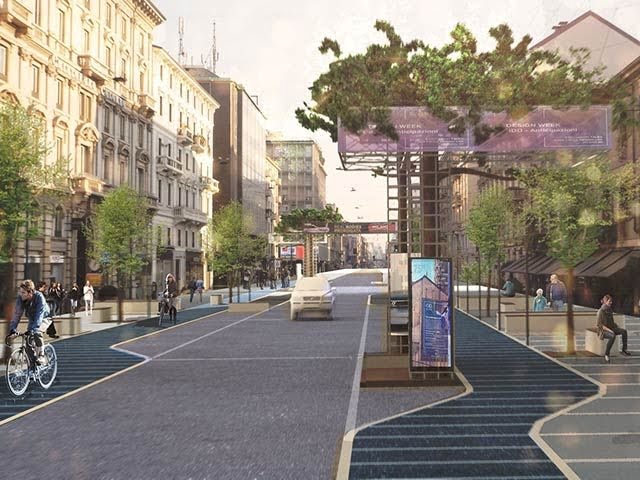 Yesterday in Turin a 43-year-old in a mad rush burned the red several times, moved in the wrong direction risking to hit pedestrians and cause a head-on and was arrested. The driver fled and was arrested after the brief escape.

For a moment, in short, the city seemed almost "normal", of our sick former normality before the coronavirus. As traffic has evaporated, traffic accidents in the city have decreased by more than 50% compared to the same period last year.

No injuries to drivers, passengers, pedestrians and cyclists. The air is cleaner, the horn is a distant memory.

Cities that have seen traffic slow with the coronavirus, however, are facing a new type of congestion. Even in times of lockdown. There is no more traffic on the roads, but the first questions are asked about the sidewalks. In countries like Japan or the USA (including New York), urban dwellers excluded from offices, bars, theaters and restaurants are flocking to public spaces in cities, sometimes trampling the rules of social distance.

Reducing the supply of open space does not reduce demand. People still need to go out, some to work, some to play, all to keep their sanity intact. Now, however, the demand comes mostly from people on foot rather than in vehicles.

Urban planners see the possibility of saving city dwellers not only from the disaster of a pandemic, but from the self-centered culture that has dominated urban life for decades.

They want to prioritize the movement of people (pedestrians, cyclists, electric scooters and the like) over cars. This isn't just the opportunity to conquer street space while most cars are parked. A range of long-term tactics can make outdoor living more enjoyable and practical in times of Covid-19. And depending on how "normal" life returns once the most acute phase of the pandemic has passed, the moves could change cities for the better and in the long run.

The biggest move is (will it be?) To close roads to vehicles, giving people more space to walk or exercise. Bogota, Colombia; Calgary, Canada; Cologne, Germany and other cities have blocked road sections in recent weeks. Friday, Oakland said which will close 10% of its road network to vehicular traffic.

Road closures, however, require resources, including materials to indicate that cars are no longer welcome and that people must apply the new regime.

New York he tried his road closures, but his schedule was limited to a few blocks and lasted only 11 days. In a confusing explanation as to why he stepped up the effort, Mayor Bill De Blasio cited the lack of workforce. "We ended up hiring a lot of NYPD staff and we can't put them in right now"he said in one press conference last week.

Cities that fear overcrowding should create many areas focused on pedestrians. Urban planning consultant Brent Toderian hypothesizes the conversion of several streets to pedestrian only "service" traffic, to decongest social proximity and allow more people to walk at a safe distance.

Mobility is the key, especially in cities where many employees of essential companies (hospitals, grocery stores, delivery services and the like) do not have or cannot have cars. "The actions that cities are taking are meant to give people space to get some air, not necessarily space to go everywhere, I think they are useful", he claims Combs.

Public transport as a vehicle of contagion deserves a separate mention: many agencies have cut the service to protect their workers, making systems less efficient. In some cases, the minor buses or trains they run become too crowded to allow passengers to keep their distance. Making walking and cycling easier and safer could relieve stress.

Cities of the future without (or with) coronavirus

Some cities have worked to do it, mainly with more infrastructure for cyclists. Bogota has added 115 kilometers of cycle paths to its already solid network. Berlin has accelerated the creation of a new network of cycle paths. Budapest it is installing temporary cycle paths on the main arteries and encouraging people who have to leave the house, both to work and to shop, to pedal instead of driving. The Hungarian capital may make some updates permanent, depending on how things are going.

Like many others introduced by the pandemic, it is difficult to predict the persistence of these changes. It is very early to understand how cities are responding.

Even after the imminent threat to human health of the coronavirus is dismissed, these changes could help keep our cities livable.

The AFS (Engineers at Air Fuel Synthesis) based in the north of England claims to have produced 5 liters of oil ...