Researchers at the University of Ghent try different dosage combinations to evaluate consumer perception of products made with insect butter. Here's how it went.

Waffles in Belgium could get more environmentally friendly and a tad exotic. But will they like it? Who knows.

Scientists at Ghent University in Belgium are experimenting with maggot fat to replace butter in waffles, cakes, biscuits and other baked goods. Researchers say the use of insect butter is more sustainable than dairy products.

How they got insect butter

Clad in white aprons, the Belgian University researchers dip the fly larvae into a bowl of water and put it in a blender to create a smooth grayish spoonful. The last phase is already somehow "home": the team uses a common kitchen juicer to separate the butter part from the insect residues.

"There are many positive things about the use of insect ingredients"Said Daylan Tzompa Sosa, which oversees the research.

"Insects are more sustainable because they use less land than cattle, they are more efficient in converting feed and they also use less water to make butter"he said Tzompa Sosa while holding out a freshly baked insect butter cake.

For a butter with less water I am in the state also different solutions, based on the dairy products already present.

Insect food has high levels of protein, vitamins, fiber and minerals. Many scientists in Europe see it as a greener and cheaper alternative to other types of animal products.

According to the researchers, consumers don't notice any difference when a quarter of the milk butter in a cake is replaced with larva fat. However, they report an unusual taste when it reaches 50%, and say they would not like to buy the cake.

And you? Would you buy her a cake with 50% insect butter, or like me do you think “maybe we'll talk about it later”?

For more information: here is the study, featured on Food Quality & Preference. 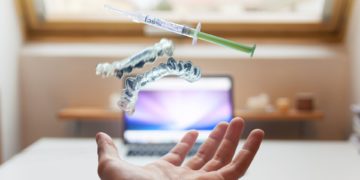 Body hacking will be an increasingly adopted practice. Here's how we are already transforming our bodies and what they will be ...