Images of 125 years ago that seem to have been shot this morning with a smartphone? Merit of artificial intelligence. And the result is splendid.

We have never lived the past as we live it today. Looking at cities and people of the 20s in color, as happens with certain documentaries, changes us inside. It is a process destined to change our own perception of time, the past doesn't seem so far away when you can see it like that.

The developer and YouTuber by name Denis Shiryaev they took things to the next level. He used several neural networks to improve a famous French short film of 1895 to show it at a crazy resolution. Now it is as if it had been shot on a smartphone.

It is a very famous short film: his fame derives from the story in which observers are presumed to be terrified by the fear that the train would break through the screen and then crashed on them

Shiryaev thought that a change would be good for the classic. He was not wrong. Ha increased the film at 4K resolution at 60 fps with different neural networks. The result is nothing short of surprising.

Here is the original film:

And here's the updated one:

The sound (added) it gives the impression that the video is not from 1895, but was shot practically this morning, only with people dressed in a bit eccentric way.

In order to make the impressive upscaling of a film that is 125 years old possible, Shiryaev used Gigapixel AI e Topaz Labs. He set some settings before upscaling the Topaz and, after some fine tuning, it got good sharp results.

This is an amazing step and opens up a world of future possibilities for restoring old films.

Yes, there are still some elements like some noise and excessive smoothing in the video, but overall nothing that can't be fixed. It is certainly exciting to think about the advancement of this technology over the next 10 years. 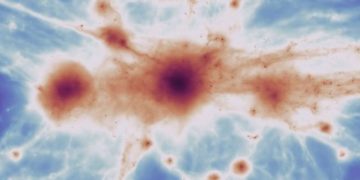 A cluster of galaxies in the C-EAGLE simulation shows a portion of an image with filaments similar to those detected in reality ....