Extreme climate, extreme remedies: even if we respect the Paris agreements, the sea will rise by 2 meters. 3 meters if we don't respect them. The shock plan to stem the North Sea appears.

Sea levels are rising faster than ever. The recent detachment of an iceberg as large as Malta in Antarctica is only the most recent of the signs. The water level can swell from one to three meters in the coming decades if we do not reduce emissions. To say it is recent research of the United Nations.

I say it in no uncertain terms: many people alive today will see several major cities in the world (including London, New York, Shanghai, Los Angeles) submerged in whole or in part. The world would lose 1,79 million square kilometers of land - an area just over the size of Libya. In Europe, Holland is running the risk of disappearing: a third of the country is already below sea level, and the North Sea would do the rest.

So what can be done?

A mega infrastructure scheme proposed by a Dutch government scientist suggests tackling the issue in northern Europe with a barrier protecting the entire North Sea.

This would require the construction of two dams of unprecedented size. The smallest would be about 160 kilometers long, protecting the entire western end of the English Channel, between Brittany in France and Cornwall in England.

The second dam would be a monster almost 500 kilometers long going from Scotland to Norway.

The Baltic Sea would effectively lose direct access to the rest of the world's oceans.

The North Sea would become a lake

The result would produce a huge lake from south-east Britain, around western Norway, north of France, and would represent the entire coast of Denmark, Sweden, Finland, Estonia, Latvia, Lithuania, Poland, the Netherlands and Germany. .

Scientists predict that completion of the project could protect 25 million Europeans from sea level rise over the next few centuries.

The estimated cost is between 250 and 500 billion euros, or “simply” 0,1% of the gross national product of all the countries that would be protected.

"The construction of a similar dam to protect Northern Europe is technically feasible", says dr. Sjoerd Groeskamp, Oceanographer at the Royal Netherlands Institute for Sea and (NIOZ).

“The maximum depth of the North Sea between France and England is just one hundred meters. The average depth between Scotland and Norway is 127 meters, with a maximum of 321 meters just off the coast of Norway. At the moment we are able to build fixed platforms at depths greater than 500 meters, so such a dam seems feasible ".

The consequences on fauna? catastrophic

So far I have only talked about the "benefits" for men. For the fauna, the consequences of this barrier would be very different.

“The tide would disappear across much of the North Sea, and with it the transport of silt and nutrients. The sea would eventually become a freshwater lake. This would drastically change the ecosystem and would also have an impact on the fishing sector ", said Dr. Groeskamp.

With his German colleague Joakim Kjellson of the Helmholtz Center for Ocean Research in Kiel (GEOMAR), Groeskamp calculated the financial costs of the project by studying large dams built in South Korea.

Their calculations took into account economic factors such as the loss of income from fishing in the North Sea, the increased costs of shipping across the North Sea, and the costs of the huge pumps needed to transport the whole dam across the dam. river water that currently flows into the North Sea.

Their research will be published this month in the scientific journal of the American Meteorological Society.

Despite addressing the practical aspects of such a colossal project, the authors said that their proposal should be interpreted “More as a warning than a solution”.

Because the costs and consequences of such a dam are truly enormous, but lower than the cost of doing nothing against them emissions CO2 and rising sea levels.

"This dam makes it almost tangible what the consequences of sea level rise will be: a 10 meter rise by 2500 according to worst case scenarios"

This dam, in short, is primarily a call to do something about climate change now. If we do nothing, this extreme barrier may be the only solution.

A barrier also for New York

The suggestion of a large dam for the North Sea comes days after a similar scheme has been proposed to protect New York.

A € 110 billion 9-kilometer dam is the largest project considered by the Army Corps of Engineers, which is examining plans designed to protect the city when damaging storms become more frequent due to the climate disaster.

The plan has sparked heated debate about how best to preserve the city and the marine wall already has its significant detractors, including the US President himself.

Donald Trump tweeted on January 18: “A huge sea wall built around New York to protect it from rare storms is an expensive, crazy and environmentally damaging idea. And it probably won't work anyway. "

And if someone who knows about walls and is particularly "optimistic" about climate change says so, one must reflect. 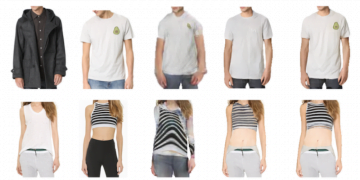 Amazon develops artificial intelligence-based technology to push the limits of distance and try on clothes online without having to ...