The situation worsens in South Korea: President Moon foresees the adoption of draconian measures similar to those adopted in China.

South Korean President Moon Jae-in has placed his country at the highest level of alert after the drastic increase in cases of the new coronavirus (officially known as COVID-19). The designation allows the government to block cities, restrict domestic travel and block public activitiesmeasures similar to those China has taken to control the spread of the disease.

Moon's announcement comes in light of 833 confirmed coronavirus cases and 18 deaths, according to WHO . The New York Times reports of an emergency meeting in South Korea to discuss the outbreak, at a time defined by Moon as "critical" for the country.

Central government, local governments, health officials, medical personnel and the entire population must provide a concise and comprehensive answer to the problem

South Korea has the largest number of coronavirus cases outside of China. We are right after that. Italy is currently facing the largest coronavirus outbreak in Europe, with over 200 confirmed cases in the country. In response, Italian officials blocked more than 50.000 people in 11 cities in the Lombardy region of northern Italy.

More than 300 confirmed cases of South Korea's coronavirus are linked to the Shincheonji Church of Jesus in Daegu, a southeastern city of 2,4 million people. The Wall Street Journal reports that the mayor of Daegu told people to stay indoors and avoid large meetings. Former church members reported that between 8000 and 9000 people attend worship services at the eight-story Shincheonji Church in the city.

South Korea's efforts are similar to those undertaken by China since the outbreak began. In January, China banned its citizens from participating in international tours and booking flight and hotel packages overseas. During the Lunar New Year holidays, many cities canceled large public gatherings to prevent the spread of the disease. The China it has also blocked millions of people in towns and villages across the country.

Worldwide, as of this writing, there are 79.524 confirmed cases of coronavirus in 29 countries. In China, there were 2.626 deaths in China and 41 deaths outside of China. 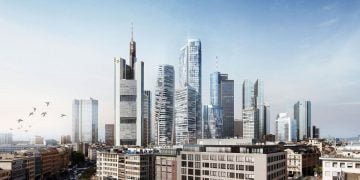 The skyscrapers of the future will extend social life from the streets to the sky. Here are the projects born or started ...