An algorithm reassembles frog cells and tissues into new living organisms that perform specific functions. It is the era of xenobots, living machines. 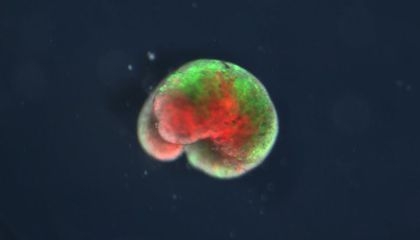 So-called "xenobots" could replace traditional metal or plastic robots without polluting the planet, but they raise several ethical issues.

They are xenobots, "living machines" with frog stem cells inside in a new configuration designed by a computer algorithm.

In the laboratory of Michael Levin at Tufts University, cells can expect to be in unusual company.

Living machines, the Frankensteins of the modern era

Here, frog skin precursors get close to cells that, in another lifetime, could have helped an amphibian's heartbeat. They are perfect strangers: biological entities which, up to this point, had no business relations. Still, Levin and his colleagues found that skin cells and heart cells can be pushed into coalescence. Side by side, they will self-organize into intricate three-dimensional mosaics of frog cells that are not frogs.

Engineered by a computer algorithm and surgically modeled by human hands, these living robots, heart-skin hybrids about the size of a grain of sand, resemble nothing found in nature.

But the tasks they perform are strangely familiar: without any external input, they can move around on Petri dishes, push microscopic objects back and forth, and even "adjust" after being cut.

Levin also rightly defines these groups of cells as "new forms of life": they are not organisms or machines, but perhaps somewhere in between.

Called "xenobot" in honor of Xenopus laevis, the African frogs from which their cells are derived, have enormous potential to reveal the rules that govern how the building blocks of life are assembled.

With a lot of additional tweaks, xenobot technology could someday also be harnessed to deliver drugs around the body, harvest environmental contaminants, and more. Levin and his colleagues write it today in the magazine Proceedings of the National Academy of Sciences. Unlike traditional robots, the living, self-healing xenobots of the future could theoretically accomplish these feats without polluting the planet, and repair themselves in case of damage.

As plastics and other hard-to-degrade polymers continue to accumulate in the environment, "The incredibly innovative approach" offered by xenobots "It could be really important for sustainability", he claims Tara Deans, a biomedical engineer and synthetic biologist at the University of Utah.

But xenobots also raise a number of ethical questions

Maybe it sounds a bit apocalyptic, but if things turn out badly humans may need protection from these and other artificial life forms. "When you create life, you don't have a good idea which direction it will take", says Nita Farahany, who studies the ethical implications of new technologies at Duke University. "Whenever we try to exploit life," he says, "we should recognize that it can also end badly."

Over the past few decades, humanity has made incredible progress in robotics. Machines can now master difficult board games and navigate difficult terrain; they can drive themselves as autonomous vehicles and seek disaster survivors. But even in their most creative configurations, metals and plastics simply can't live up to cells.

"Biological systems are the envy of robotics", he claims Levin. “They are adaptable, flexible, they repair themselves. There are no robots in the world that are truly capable of doing this. "

That's why Levin and his colleagues decided to make one. Together with robotics experts Sam Kriegman e Josh Bongard of the University of Vermont, asked a computer algorithm to design a series of living machines, using frog skin and heart cells as raw material. The algorithm was trained to optimize each xenobot for a different basic function, such as moving back and forth or manipulating objects.

After testing different configurations, the algorithm selects the digital projects it deems best suited to the task at hand. The researchers then attempt to recreate these designs in Levin's lab.

Even after being scraped from frog embryos and smashed into a fluid-filled disc, the skin and heart cells will race to unite. "Cells love to be together"says Levin. He's the microsurgeon who took the newborn living robots and sculpted them into the shapes specified by the computer.

All the ingredients in the xenobots come from an authentic frog, but there is nothing amphibious in the final forms they took. Some have turned into disjointed shapes. others have taken the form of hollow prism-like structures. The robots lacked limbs, skeletons and nervous systems. But they easily coped with the tasks they were designed for.

With no mouths or digestive systems, they are fed exclusively by the pieces of embryonic yolk with which they were "whipped". That's why they die after about a week when that culture fluid dries up, Bongard says. But he and his colleagues think robots could someday be used to carry drugs into human bodies or to scrape plaque from arteries. Released into the environment, they could monitor toxins or wipe out microplastics from the oceans.

The team is already experimenting with different types of cells, for different types of functions. The xenobots also appear to be able to create new versions of themselves, putting individual cells together until they begin to merge, Levin says. They are also resistant: once broken, the robots simply repair their wounds and continue.

And now the inevitable problems and some ethical doubts

A lot of good could come from this technology, but it's also important to consider potential risks. It also states this Susan anderson, a philosopher and machine ethics expert at the University of Connecticut. In the wrong hands, the power of xenobots could easily be harnessed as a biological weapon. It would carry poisons rather than medicines into people's bodies.

Humans already have tinkered with the recipes of life. In recent years, bioengineers have reprogrammed cells to churn out life-saving drugs, strip genomes to their lowest states, and hybridize animals with other animals (or with human cells).

But multicellular life forms synthesized from scratch are still few and far between. Also why much of biological development remains a mystery. Researchers are still not sure, for example, how tissues, organs and appendages manifest themselves.

Studying xenobots could certainly help crack that development code. But to get there, scientists will first have to experiment. Mastering techniques and technologies that they do not fully understand. Starting with the machine learning algorithm that designs these life forms.

Bongard and his colleagues recognize the delicacy of their work. "The ethical problem around this issue is not trivial", says the scholar. Although the researchers have not yet brought bioethicists to see their research, “Is something we will have to do. It is useful in the context of the discussion on what to do with this technology "he adds. First, however, “We just wanted to show that this was possible”.

Well. It is possible. The era of living machines begins.

The interactive menus to load on the smartphone by framing the QR Code? Exceeded. With the holographic menus choices and orders will be ...